What’s the future of the Agawa Canyon Tour Train? 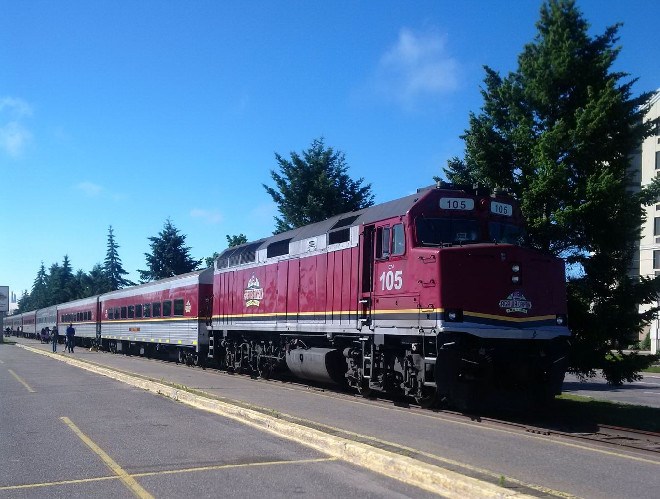 The Sault Ste. Marie Economic Development Corporation wants a railway consultant to give them some direction on how to boost ridership on the Agawa Canyon Tour Train.

With the looming expiration of an operating agreement to run the Agawa Canyon Tour Train, the Sault Ste. Marie Economic Development Corporation (SSMEDC) wants to shake the bushes to maximize the tourism potential of the world-famous wilderness excursion.

The corporation posted a request for proposals (RFP) on March 5 for a consultant to map out a new and expanded business case and operating model for the city’s signature tourism attraction.

A 10-year agreement between CN Rail, the economic development corporation, and the Northern Ontario Heritage Fund expires after the 2020 tourism season.

“With the agreement coming to an end, we want to look at opportunities on what new markets, demographics, and what new experiences can be had with upgrades in the canyon to provide a better visitor experience,” said SSMEDC executive director Dan Hollingsworth.

The study will be the cornerstone document behind a new 10-year business plan for the tour train to identify new tourism products and experiences geared to attracting wilderness enthusiasts. The ultimate aim is to boost ridership and revenue in the summer and fall months.

CN Rail owns the 295-mile track between Sault Ste. Marie and Hearst, formerly known as the Algoma Central Railway. The rail carrier picked up the line when it acquired the Wisconsin Central in 2001.

The track was laid at the beginning of the early 1900s as part of the industrial empire built by American entrepreneur Francis Clergue in Sault Ste. Marie. The Algoma Central Railway was created to haul iron ore from the mines at Wawa to feed the furnaces at Algoma Steel.

Mining operations shut down in 1998 but the line gained greater international attention for the Agawa Canyon train, considered the “heart” of the city's tourism industry.

It’s a one-day return trip through the Canadian Shield from downtown Sault Ste. Marie, 114 miles north, to the Agawa Canyon Park, roughly a nine-hour trip. The rugged and picturesque canyon gained notoriety as a painting location for the Group of Seven artists.

In a typical year, Hollingsworth said the tour train draws more than 30,000 riders, a far cry from the excursion’s hey-days in the 1980s when it would annually attract more than 100,000 international visitors in running from late June to early October.

Over the years, the railway, the city, and the province funded $11.2 million in improvements to upgrade the train’s rolling stock and the onboard audio-visual presentation.

But the attraction itself, the canyon park, has stayed the same since the picnic area was carved out of the bush in the early 1950s, with trails and scenic lookouts added over the decades.

The park offers no overnight accommodations or possible hiking, biking, kayaking and other wilderness spinoffs. That’s something that must be explored, he said.

“What type of products are consumers looking for, what kind of experiences and let’s identify those to increase ridership.”

Hollingsworth said the study will examine whether the tour train can be extended into the winter months, but cautions the finished report won't investigate the possibility of restoring passenger service between the Sault and Hearst.

While CN Rail axed that service in 2015, Hollingsworth said a new operating agreement for the tour train appears to have the railway’s full support.

He describes CN’s attitude toward the continuance of the Agawa Canyon service as “very positive." CN has a seat at the tour train working group table and had input into the wording of the RFP.

Hollingsworth harbours no concerns about the line's future as part of CN’s larger North American network.

“That line has greater importance (in the freight business) for them as strategic entry point into the U.S. at mid-Canada.

“They’ve said, if this makes good business sense, we’ll do it.”

CN has given no indications to Hollingsworth that it wants to change the relationship in terms of crewing the train or maintaining the track to the highest possible standards to safely transport passengers.

According to CN's three-year network plan, posted last September, the track is listed as being retained.

Should the Ring of Fire ferrochrome smelter be awarded to either the Sault or Timmins, the line will be play a critical role in transporting James Bay ore to the processing plant.

When the report is finished, Hollingsworth said the full document, containing the financial data, won’t be made public, but a summary will be released to generate some excitement.

“The plan is to use it as a building block for the future.”

The tour train’s southern anchor appears to be locked up with news on March 22 of $5 million in provincial funding for a new tourism development catering to the train.

The funding for the Paper Mill District, on the site of the former St. Marys Paper plant, includes a new passenger terminal, an exhibition gallery, a microbrewery, and an outdoor event centre.

It would complement The Machine Shop, a trendy new restaurant, pub and event venue inside an historic sandstone building that was once part of the mill's operation.

Hollingsworth said Porco will match the provincial funding dollars for the two-year construction project, expected to start this spring.

“I think this is one of the biggest investments in tourism infrastructure in our community in a while,” said Hollingsworth.

Porco is finalizing negotiations with CN for the train station with a tentative opening slated for the start of the 2021 tourist season.

Compared to the existing ticket office on Bay Street, the new station will offer better visibility to American visitors coming off the International Bridge, said Hollingsworth.

And when integrated into Porco’s development, “we can do some cool stuff in the evening once people get off the train” with dining, entertainment and tourism information and retail opportunities.