Little did Francis H. Clergue know, when he constructed his pulp and paper mill in the early part of the 20th century, it would still be going strong 100 years later as one of Sault Ste. Marie’s most important cultural and business hubs.
Aug 3, 2016 3:58 PM By: Lindsay Kelly 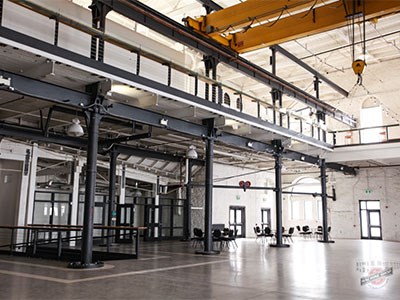 Formerly part of the St. Marys Paper mill complex, the Machine Shop in Sault Ste. Marie has been transformed into an event and conference space.

Little did Francis H. Clergue know, when he constructed his pulp and paper mill in the early part of the 20th century, it would still be going strong 100 years later as one of Sault Ste. Marie’s most important cultural and business hubs.

The St. Marys Paper mill, which permanently closed in 2011, has undergone a transformation over the last five years, with The Machine Shop emerging as a burgeoning conference and performance centre that’s hosted business symposia, concerts and cultural events.

Joe Iachetta, who was brought on recently as operations manager, has been buoyed by the investment into the space by the new owners, a group of local investors who took over the building last December.

“I’ve been born and raised in Sault Ste. Marie, and I see some of the buildings that get torn down and some of the opportunities that are bypassed, but the new ownership in this place has taken a direct approach to repurposing this building,” he said, comparing the St. Marys site with similar adaptive reuse work done in Toronto’s Distillery District.

“These are buildings that are 100-plus years old and they’ve been brought back to life.”

One of five sandstone heritage buildings that made up the original St. Marys operation, The Machine Shop has been cleaned up and repurposed as a 40,000-square-foot event and conference space.

Of that, 15,000 square feet is dedicated to venue space, which has a 24-foot diagonal projection screen and two projector units, a 24-speaker sound system, wireless microphones, and a green room that can be used by entertainers or guest speakers.

Another 3,000 square feet in the mezzanine have been set aside for small rental units. Algoma University’s Fine Arts program operates nine classrooms in the building, and the city’s Economic Development Corp. set up a small business incubator, Millworks, in May.

In development and slated for an August opening is a 2,000-square-foot steakhouse and bar, equipped with a state-of-the-art kitchen, which will be open for lunch and dinner seven days a week and double as a catering service for in-house events. Chef Glen Dahl, who oversaw the culinary arts program at Sault College for 29 years, has been brought on as head chef.

Hiring is currently underway, and Iachetta said between the venue, the restaurant, and the kitchen, he’ll be looking to hire between 40 and 50 people in total.

“There seems to have been a lot of revitalization in this whole mill-canal district and we just want to make sure that we’re the focal point of it and the heartbeat of the district,” said Iachetta, who’s worked in the hospitality and restaurant business for 35 years.

The Machine Shop has already hosted myriad events and activities, including business matchmaking event Naturallia, concerts by The Sheepdogs and Alan Doyle, science and cultural trade shows, and municipal conferences.

Events are booked at the space going right into 2018, and more bookings are coming in every day.

Events and promotions manager Stephen Alexander said because the space is a wide open, rectangular box, it can be arranged for a variety of purposes, whether it’s a concert for 750 people or a corporate dinner for 100.

“The dynamics of the space lends itself to be very diverse in many different kinds of events, and we can cater to a wide range of different businesses and people,” Alexander said.

As the owner of LopLops, a local bar that’s known for bringing in musical acts from right across Canada, Alexander said The Machine Shop helps fill a gap in available performance and conference space that’s been lacking in the Sault.

A place like LopLops fits about 100, but the next large-sized venue is the nearby Essar Centre which accommodates 4,000.

Alexander believes The Machine Shop can become Northern Ontario’s “crowning jewel,” able to compete with any venue of comparable size or space in Ontario.

“The layout of the space is quite interesting and the location of it in our downtown is actually quite unique, even for venues and developments of this size,” he said.

“So it should be very interesting over the next three to five years to see where this space and location will go.”

Response to The Machine Shop has been overwhelmingly positive, with events at the space regularly surpassing their anticipated attendance by five times what’s expected.

Alexander foresees booking between a “very attainable” 12 and 20 shows at the space annually, which he calls “very exciting for the Sault.”

In an era when the steel business is slumping and Essar Steel Algoma — the city’s primary and largest employer — is in creditor protection, The Machine Shop is taking a new approach to business, focusing on engaging young entrepreneurs, developing tourism, and attracting conference and convention business.

“For so long our identity has been steel and, to a lesser degree, paper, so it’s interesting that our paper mill is now leading the change of how we think about ourselves as a community and our identity,” Alexander said.

“With everything that’s going on with the steel mill and that sector, people are adopting the philosophy that it’s better than 100 businesses hire 10 people than one business hiring 1,000 people.”