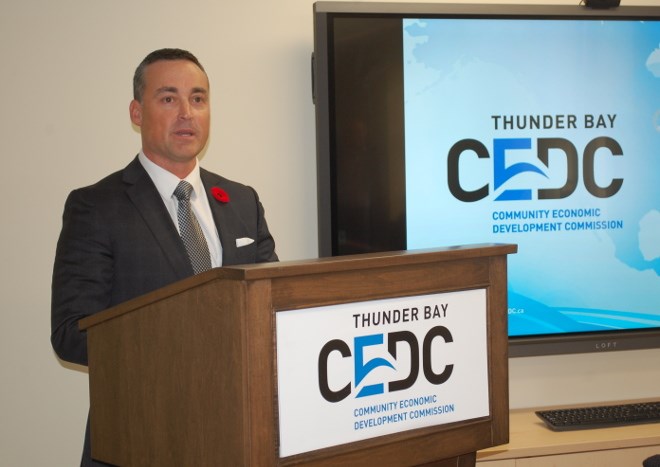 The Thunder Bay Community Economic Development Commission (CEDC) has once again turned to the private sector ranks for someone to lead the department.

Well-known local professional engineer Eric Zakrewski was selected by the commission’s board of directors to succeed Doug Murray, a former forest industry executive, who is retiring.

The announcement was made at a Nov. 7 press conference at the CEDC’s offices.

Zakrewski officially starts Nov. 18. Murray will remain aboard for a month to assist him through a transition period.

After 26 years in the consulting and engineering field, Zakrewski, 47, said he was ready for a career change.

This position, he said, allows him to put many of his learning experiences and skill set to good use.

“It’s a new challenge for me. I’ve always had an economic development perspective on my career, being in the private sector in professional engineering and consulting.

“In that industry, you’re always looking at where opportunities are developing around infrastructure, major resource development projects and manufacturing. We were essentially all working for the same sectors that the CEDC is supporting to try to help grow under its mandate and mission. So there’s a really good alignment there.”

In his remarks, board chair Craig Urquhart said a “significant number” of applicants came forward. Ten candidates made the shortlist; seven were interviewed and graded on a scoring system.

“Mr. Zakrewski is very well qualified and has an extensive commerce and engineering background as well as his ongoing knowledge of the city and region.”

His strong presence in the community, understanding of key sectors of the local economy, and the business partnerships his company formed checked off many boxes for the search committee.

Urquhart thanked Murray for his accomplishments over his six-year tenure as CEO and the great community acceptance he received.

Murray, 61, was hired as CEO in August 2013 after a 30-year career in the forestry industry, including as general manager of Resolute Forest Products' Thunder Bay mill.

Urquhart said Murray informed the board of his decision to retire last May, providing them adequate time to conduct an extensive search for his successor.

Zakrewski said he brings a “very current, street-level perspective” to the job in trying to grow the local economy and attract investment to Thunder Bay.

He vows to bring a “hands-on approach” to loosen red tape around property redevelopment rules in the city, particularly with historical industrial brownfield sites, an initiative that the CEDC has already started on.

In both an interview and in his remarks at the press conference, Zakrewski said he intends to work off the already-established platform and the initiatives that Murray and his team are currently working on.

The CEDC’s latest strategic plan reflects Thunder Bay’s transition over the last two decades of being, historically, a forest products town to that of a more knowledge-based economy engaged in high-tech advanced manufacturing, health care and post-secondary education.

Zakrewski said he’s excited about assisting small businesses in those fields and in working on the immigration piece through the federal pilot program to attract and retain newcomers to fill the skilled labour void.

“We’re changing the face of what Thunder Bay can be known as; instead of an historically industrially-based community, we’re now getting known as more of a technologically based economy, centring around health care and education," he said. "We’re seeing a change and it’s exciting because there’ll certainly be a lot of new business opportunities with that.

“There’s going to be a learning curve working around the federal government to make that happen. It’s certainly new to me, but I’m excited to take that on.”

Innovation centres seeking producers to ramp up during pandemic
Apr 1, 2020 5:06 PM
Comments
We welcome your feedback and encourage you to share your thoughts on this story. We ask that you be respectful of others and their points of view, refrain from personal attacks and stay on topic. To learn about our commenting policies and how we moderate, please read our Community Guidelines.