Doug Murray isn't promoting himself as the new guy with all the answers. But the CEO of the Thunder Bay Community Economic Development Commission (CEDC) is searching for some good ones in casting a wide net across the community.
0
Dec 5, 2013 7:47 PM By: Ian Ross 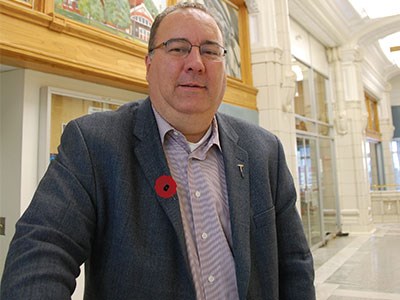 Doug Murray isn't promoting himself as the new guy with all the answers.

But the CEO of the Thunder Bay Community Economic Development Commission (CEDC) is searching for some good ones in casting a wide net across the community.

The CEDC's board of directors nabbed the forest industry veteran last summer to replace Steve Demmings who retired in the spring.

Murray is the former general manager of the local Resolute Forest Products mill and brings more than 30 years of industry experience at operations in Northern Ontario and British Columbia.

Trained a chemical engineer, Murray said his background makes him uniquely qualified for the job.

“If you ran a paper or kraft mill for the last 15 years, if you didn't know economic development, you got closed down. You had to step outside the box to create innovative ways to stay in business. You had to know how to turn a dollar.”

Murray wants to map out a new strategy that reaches out to entrepreneurs, business owners and organizations in his hometown.

Through his involvement with service clubs, the chamber of commerce, the Northern Ontario Policy Institute and Lakehead University's economic advisory committee, Murray observed there's a ton of stakeholders with a hand in economic development.

“There are lots of people involved in moving the economy along, but how coordinated are we in understanding each other's goals?,” said Murray. “I look at my role as a guy that organizes collaboration.”

Murray wants to open discussion with 35 to 40 influential groups, companies, and local movers and shakers to help him formulate a three-year strategic plan to better understand where Thunder Bay's and the northwest's economy is going.

Why a three-year horizon? “The world changes too much,” said the straight-talking Murray. “Who would have know in 2007 of the disaster we were heading for in 2009?”

Murray heads up an organization that's intensely investigating the region's huge mineral potential and the spinoffs that may come Thunder Bay's way. There's no shortage of future mine projects on the books with companies like Premier Gold in Geraldton, Stillwater Mining in Marathon, New Gold's acquisition of Rainy River Resources in Emo, and new startups and expansions at Red Lake.

Then there's the blue sky potential for chromite in the James Bay Ring of Fire, which could be bigger than the Sudbury basin.

But Murray finds more questions than answers since the mineral estimates have yet to be proved up will exploration grinding to a halt, the lack of a definitive plan on how the ore will be take out, and so much uncertainty on how much of the chromite processing will be done in Northern Ontario.

As a mostly junior mining play, Murray said the future is still in flux on who the final players will be. For now, Murray and his mining services manager John Mason are talking with operators of the region's four mines to address how Thunder Bay can address any service and supply chain gaps.

“People think of Thunder Bay as a forestry town and transportation hub. But we have good companies and people who supply the mines so we have to bring attention to ourselves.”

The forestry sector is making a tepid recovery, but Murray finds there is still hope with the U.S. housing market rebounding.

“You are seeing sawmills coming back into operation. We do have segments of the forest that aren't being used. There's still a hardwood allocation out there.”

Rentech is preparing to ramp up wood pellet production in Atikokan and Wawa to supply Ontario Power Generation's generating station and feed Drax Power in the United Kingdom.

Murray isn't sure there's a long-term future solely in pellets. He'd rather look at more value-added business propositions that better utilize the whole log of underappreciated species like birch and poplar.

And making wood-based biofuels and green products will proceed only if the economics make sense. “Most people don't realize how much effort it takes to get a tree out of the forest; the regulations, the hauling, the handling; the production of chips,” said Murray, “that's where they have no idea how much wood costs.”

With companies like XLV Diagnostics wanting to build prototypes for clinical trials, Murray would like to see Thunder Bay take on those manufacturing jobs.

“What cluster can we build up in advanced manufacturing that starts to grow that?,” said Murray. “Those are opportunities we're going to continue to work on.”