Laurentian mining experts working in different fields will find themselves playing on the same team in the coming months.
Mar 30, 2016 2:28 PM By: Ella Myers 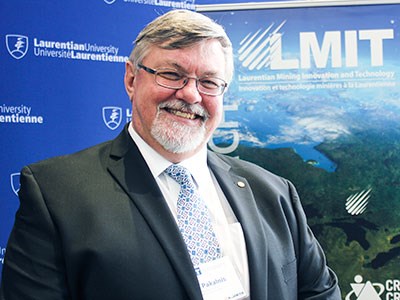 Laurentian mining experts working in different fields will find themselves playing on the same team in the coming months.

“We usually just sit here in our silos,” said John Gunn, director of The Vale Living with Lakes Centre. “Until our first meeting I didn’t know much about the other groups.”

The four centres are the Centre for Research in Occupational Safety and Health (CROSH), the Mineral Exploration Research Centre (MERC), the Mining Innovation Rehabilitation and Applied Research Corporation (MIRARCO) and the Vale Living with Lakes Centre.

The LMIT will co-ordinate and promote all mining-related research at the university, with a stated goal to develop a safer, more productive and more sustainable mining industry in Ontario.

LMIT’s associate vice-president will be Vic Pakalnis, a mining engineer from MIRARCO. Pakalnis said the initiative will present a united front to industry and government, and provide economic opportunities.

“Individually, we’re fabulous. Together, with the overarching umbrella organization, we can access more, including global markets,” said Pakalnis.

Pakalnis and Laurentian’s vice-president of research, Rui Wang, have been working on a partnership between China’s largest mining university and Laurentian’s research groups for several months now, an example of one of the projects LMIT will be facilitating.

In his role at the Living with Lakes Centre, Gunn hopes to see a project developing microbes to deal with mining tailings get off the ground with the added knowledge of researchers in other groups.

“What it is going to do is create these large multidisciplinary teams,” said Gunn. “I need the engineering department, I need geologists.”

Gunn is optimistic the initiative will lead to concrete growth including new facilities and new researchers getting hired onto the projects.

“The formality of having a common hub and regular meeting schedule will benefit the research,” said Gunn. “This is not meant to encumber but to enrich.”