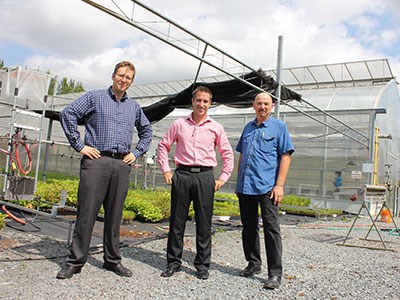 The two didn't stay on their family farms, but the College Boréal professor and dean of the School of the Environment and Natural Resources, respectively, are continuing the tradition in a different way. The two are heading up Sudbury's new agricultural technician program, training a new generation of farmers.

“We're hoping to be a part of what drives the agricultural sector,” said Vaillancourt. “It's hard to get youth interested in farming, but in the North they are talking more about farming.”

“That's what we're responding to,” said Lapointe. “All of the importance put on agriculture, the low price of land, and that people want to grow local food.”

The program is unique in Northern Ontario, and will have two focuses: animal sciences and plant sciences. Students will have to choose one to specialize in, although they won't specialize too narrowly. The students will be learning a variety of growing methods including traditional, hydroponic, and sustainable methods that are adapted to modern agricultural and environmental trends. Management courses that cover finances, human resources and labour will accompany more hands-on courses in plant and animal management.

The school is hoping to have a rooftop greenhouse built for the project, similar to the existing greenhouse the college's forestry program uses.

Besides work in the greenhouses, much of the hands-on training happens during a mandatory summer work placement. The placements are paid positions on farms that can be in the area, or anywhere else in Canada.

Along with the placement, the program has an incubator component that sets students up to jump into the workforce.

“I think it's important that what will distinguish this program from others in the province, and in Canada, is we're integrating the incubator aspect,” said Vaillancourt. Students will have to complete a project that acts as a business on a small scale, whether it's growing greenhouse tomatoes or raising chickens.

“They will be seeing the entire cycle, including financial planning and time management,” said Vaillancourt.

The college does have an active farmer on board as their program adviser, although, oddly enough, he is a self-described “city slicker” who grew up in Montreal and received no formal training. But Louis-Philippe Desjardins is looking forward to shaping the program he could have taken.

“I wish I would've had the opportunity to do an incubator project. I would've saved myself, period,” laughed Desjardins.

Desjardins is hoping to get a student on his farm to teach. In the past, he's worked on educating youth on his own by hosting interns and volunteers on the farm, and he even has one young farmer using a piece of his land as a launch for her own business.

Beyond the post-secondary training offered by the program, Desjardins is excited that it will allow for applied research opportunities that could benefit himself, and other local farmers.

“If a farmer wants to try a different type of product or growing method, they could tap into our research funding and expertise to move their project forward,” said Vaillancourt.

As the program is in its first year, they're proceeding slowly, but they're anticipating around six students in their first year. Many of the students, they said, will be small farmers just starting up, or existing farmers interested in succession planning.

“It's one of the few programs where the first day of class, students know where they will be working after,” said Vaillancourt.

Lapointe thinks pride and passion are what drive many people to become farmers and thinks they'll see that spirit in their new students.

“To be a farmer, you are your own boss,” said Lapointe. “The people consider you a valuable worker because you bring them food, and many farmers are proud of that. They have that passion.”

North Bay university's interim president begins her term
Jul 10, 2020 8:00 AM
Comments
We welcome your feedback and encourage you to share your thoughts. We ask that you be respectful of others and their points of view, refrain from personal attacks and stay on topic. To learn about our commenting policies and how we moderate, please read our Community Guidelines.