The sky’s the limit for Canadore College aviation students with the September grand opening of the Advanced Composites Fabrication, Repair and Test Centre (ART-TC) in North Bay.
Sep 18, 2015 2:08 PM By: Ian Ross 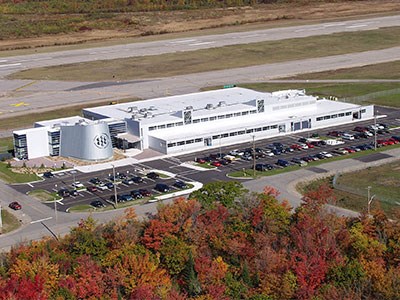 The sky’s the limit for Canadore College aviation students with the September grand opening of the Advanced Composites Fabrication, Repair and Test Centre (ART-TC) in North Bay.

Some leading-edge technology is being introduced to allow students to make composite material for aircraft inside a brand new 5,000-square-foot addition at the college’s aviation campus at Jack Garland Airport.

Built for $4.5 million, the one-story addition to the aviation building is comprised of three labs, with two “clean” and “dirty” rooms for making advanced composites, along with a coveted non-destructive testing (NDT) space.

“The demand now is for students who really understand this craft and can actually get into making parts with it,” said Martin Galvin, Canadore’s dean of aviation, business and liberal studies. “It’s really intricate and we’re excited to be getting into that field of composites for production.”

NDT is used for quality assurance and inspection of materials and equipment in a wide variety of industries such as the oil and gas, transportation, construction, metals, foundry, welding and fabrication, and aviation sectors.

The lab will offer students both theoretical and practical skills with four different inspection methods in magnetic particle, liquid penetrant, ultrasound, and Eddy current inspection techniques; the same equipment as used as much larger aviation operations.

The technology and expanded space should be a powerful draw to lure companies onto the campus to use the facility on their own or collaborate with the college.

Galvin said it will also enhance their existing programming, specifically aircraft structural repair which the college wants to extend to a two-year program with a composite manufacturing component.

Up until now, students received only basic training in composites and non-destructive testing methods in working with fibreglass, Kevlar and carbon fiber material. Students would make and smash small pieces of composite material to perform repairs.

Designed by Larocque Elder Architects and built by Kenalex Construction, the new facilities will allow them to manufacture large aircraft components, like a wing section, and perform modern quality control inspections.

Canadore is working with Airbus Helicopters Canada to help develop some new curriculum.

Instructors had planned a September trip to the company’s main production facility in Fort Erie where composite parts are made for various helicopter models.

“We were going to pick their brains on how they do what they do and what are the important things to teach,” said Galvin. “They have composite production within their facility and we’ll be looking at how they do that.

“We will not be building helicopter parts on their scale but we’re going to learn about production instead of making small, flat pieces and breaking them.”

The decision to teach composites manufacturing came from the college’s program advisory committee.

Once a year, Canadore invites leading aviation industry experts to North Bay for a brainstorming session on what training is needed to keep the program current and graduates in demand.

“The message was composites. That’s where the industry is going,” said Galvin.

The composites have been used in aircraft manufacturing for decades to reduce weight while maintaining structural integrity.

Each successive series of aircraft produced by Airbus or Boeing has an increasingly higher percentage of composite material in it. And that trend will continue, said Galvin.

“It’s a speciality to build with composites and production was not something the college had taught in the past.”

Though the new ART-TC facility is too small for large production runs, Galvin said the college’s doors are open to local companies to work on specific pieces or on prototype development.

“Everything is really up for discussion.”

And having industry standard training tools in a modern facility is a great recruiting tool for potential students. “This will be the only aviation college that puts all that together,” said Galvin.

Since the aviation campus was originally built in 2005, its capabilities are growing in leaps and bounds, thanks especially to a partnership agreement struck last year between the college and S3, a Swiss satellite company, which is performing tests in North Bay for a reusable space shuttle concept to launch small satellites into orbit.

With the encouragement of college president George Burton, another phase of expansion is coming with plans to extend and heighten an existing hangar to accommodate jet aircraft for maintenance training.

There is no definite timeline on that groundbreaking, Galvin said, but it’s a high priority with Burton. “He’s working hard on this and he doesn’t take no for an answer.”