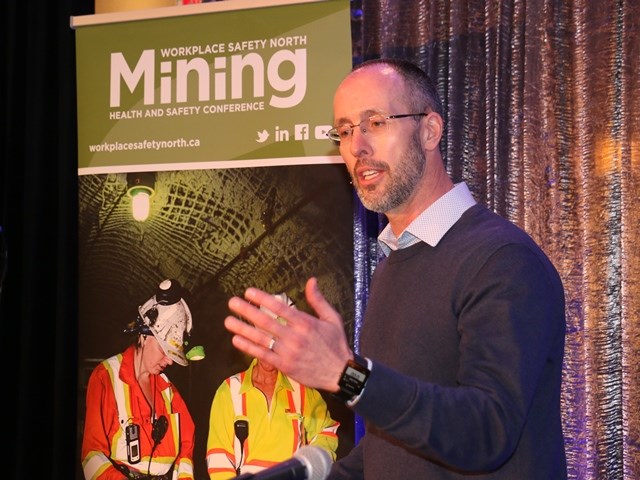 The Mining Association of Canada estimates that the mining industry directly and indirectly employs 632,000 people throughout the country.

When you look at the numbers, that means that about 126,000 workers will experience a mental health challenge every year.

Keith Hanson, area manager and director of workplace health at Lifemark Health Group, further estimates that about 10 per cent of those employees will be off work at some point.

“When somebody goes on a disability claim for poor mental health, it's usually twice as expensive as any other physical claim and also twice as long,” said Hanson.

His findings are backed by James Kruck and Jenna Kressler, researchers with Occupational Safety Group, who found that mental ill-health can cost companies between $300,000 to $40,000 annually.

“If you look at the mining industry specifically, (the mining sector is) at risk of a worker shortage in the coming years," Hanson said. "That's a real challenge for companies.”

Physical safety has always been a prominent discussion within the mining industry. Companies regularly assess workplace hazards and work towards creating safer environments.

But as Hanson pointed out during a panel discussion at the inaugural Mining Engagement Conference for Advancement (MECA) in Sudbury in October, you could conceivably remove every physical safety hazard in a workplace, but if you don't address mental health, workers will still have accidents.

That's why it's important for mining companies to establish systems and processes that consider mental health, and to develop an overarching mental health strategy.

To develop a strong strategy, however, you need to know what you're up against. Until recently, there hasn't been much information available about mental health in the mining industry.

Australia's mining industry has conducted some research, but the rest of the world is lagging behind. Recently, Vale put some effort into trying to close the gap.

In April, at the 2019 Mining Health and Safety Conference in Sudbury, Dr. Michel Larivière, a clinical psychologist and former associate director for the Centre for Research in Occupational Safety and Health (CROSH) at Laurentian University, presented the findings of a five-year, $400,000 study called Mining Mental Health.

The project was entirely funded by Vale and relied on the voluntary participation of Vale's Sudbury-area workers, members of the Steelworkers Union (USW).

The study was unique because it offered a glimpse of what was going on in employees' heads – employees specifically working in the mining industry in Canada.

Roughly 56 per cent of participants in the study were experiencing some kind of symptom that warranted attention.

Eight per cent displayed symptoms of depression, and 10 per cent experienced thoughts of suicide without a plan to follow through.

These numbers aren't all that different from the general population. They are also numbers that shouldn't be ignored, Larivière said.

When talking about mental health, Hanson likes to rely on the World Health Organization's definition: “A state of well-being in which the individual realizes their own abilities, can cope with the normal stresses of life, can work productively and fruitfully, and is able to make a contribution to their community.”

Mental health is determined by factors both internal and external.

“Our physical health is determined by a number of things: if you smoke, exercise, how often you exercise, etc. Mental health is the same way,” said Hanson.

The problem is that mental health is more fluid than physical health – it is less static, and it changes more often. In the mining industry, there are numerous hazards that can contribute to eroding an employee's mental health.

These include workload, workplace harassment, lack of support services, and fatigue. In particular, Hanson highlights the risk of stigma associated with a male-dominated workforce.

“Men are unlikely to talk about mental health and are less likely to seek help due to stigma,” said Hanson.

Stigma also tends to be generational. The average age of a person working in the mining industry is about 43. Younger generations are far more likely to openly discuss mental health than older generations.

Tackling these issues in the workforce is becoming increasingly necessary, said Hanson, especially because mining will be more reliant on northern resources and rural communities in the future.

The further north you go, the less access you have to health-care services. There are also a list of additional hazards associated with fly-in, fly-out operations.

Companies should be focusing on developing a mental health strategy that actively tries to identify psychological and social hazards in their workplace, puts in place early intervention services, and allows for return-to-work arrangements.

They also need to actively, consistently work to decrease stigma.

Vale can be upheld as a good example.

The company has introduced mental health first aid to its employees, taught by Hanson, and has participated in a number of initiatives, including the Elephant in the Room campaign, to try and decrease stigma and encourage free dialogue.

Other companies have also started to follow suit. IAMGOLD, for example, has been active recently in supporting mental health in youth.

The goal is to normalize conversations about mental health and to equip workers with the tools to be able to identify someone struggling.

“What happens in times when the price of nickel goes down, budgets get cut back, and wellness initiatives usually get cut first,” he said.

“The problem with that is you are actually cutting where it has the greatest return on your investment. Of course, your return won't be tomorrow. It's usually three to five years before you see return. But not doing it is a huge price to pay, and I don't think companies understand.”

To incorporate a mental health strategy into the workplace, organizations are encouraged to approach the issue in the same way they approach physical health.

“Design it around the same principles the company is already using in their approach to physical hazard management,” Hanson said.

But the most powerful thing people can do to destigmatize mental ill-health is to “storytell.”

“You just have no idea how powerful it is in being able to change attitudes of others, to open up the conversation about mental health and the acceptance of it,” Hanson said.

When workers hear someone open up about their own struggles, particularly if it comes from a manager or leader, it encourages them to engage in conversation as well, he added.