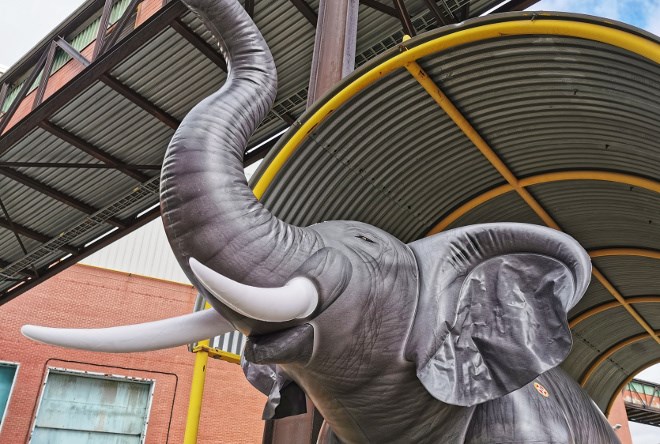 A large elephant mascot at Vale’s Clarabelle Mill in Sudbury is linked to the Elephant in the Room Anti-Stigma Campaign, which aims to help employees feel comfortable talking about mental health and accessing services. (Supplied photo)

Vale Canada has adopted a new mental health campaign at its Sudbury operations aimed at reducing the stigma of mental illness.

The company announced on Oct. 8 it’s partnering with the Mood Disorders Society of Canada on its Elephant in the Room Anti-Stigma Campaign, which encourages employees experiencing a mental health concern to talk to a fellow employee who has received mental health training.

To address the “elephant in the room,” employees who have received the training will display a small blue elephant on their desk as a signal to others that they are trained and have “created safe spaces for conversations with individuals experiencing a mental health concern,” the company said.

“This is a great way for employees to easily identify themselves as being trained in Mental Health First Aid,” said Claire Parkinson, head of health, safety, environment and risk for Vale’s North Atlantic Operations, in a news release.

“The Elephant in the Room Campaign pairs with our Mental Health First Aid and MINES for Minds programs to raise awareness, tackle stigma, and visibly identify the people and places where we can find support to talk about our mental health.”

Results of a five-year study into the mental health of Vale miners in Sudbury – called Mining Mental Health – demonstrated that 56 per cent are experiencing symptoms of mental illness that could be of concern.

The company’s Sudbury operations include five nickel mines, a mill, a smelter and a nickel refinery.

Sudbury regreening program nearing 10 million trees planted
Sep 29, 2020 4:09 PM
Comments
We welcome your feedback and encourage you to share your thoughts. We ask that you be respectful of others and their points of view, refrain from personal attacks and stay on topic. To learn about our commenting policies and how we moderate, please read our Community Guidelines.