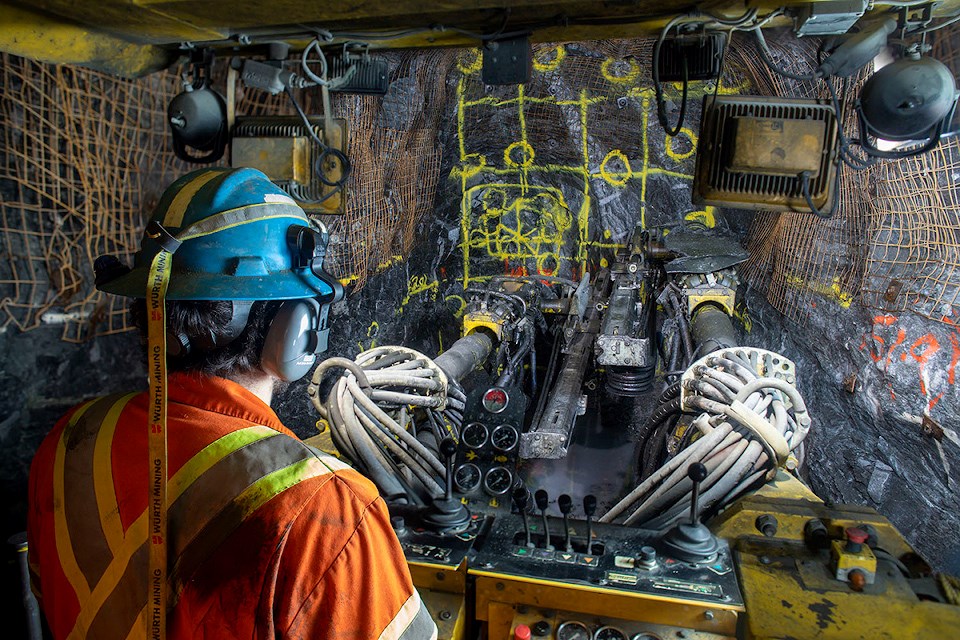 Alamos Gold has set some lofty goals for its Island Gold Mine in northeastern Ontario to be one of the industry's lowest cost and most productive operations.

The Toronto mid-tier miner plans to boost annual gold production by 72 per cent to 236,000 ounces starting in 2025 when construction is scheduled to wrap up on a US$514-million shaft and processing mill expansion project.

The company unveiled its much-anticipated study detailing its third phase of expansion since Alamos acquired the high-grade underground operation in 2017 from Richmont Mines. The mine began production in 2007.

The Island Gold Mine is 10 kilometres southeast of Dubreuilville and 83 kilometres northeast of Wawa.

Coupled with operating costs, the shaft expansion represents a more than US $1 billion investment for Alamos over a now-doubled mine life of 16-22 years. In that span, Alamos expects to produce 3.2 million ounces of gold, grading at 10.45 grams per tonne.

Mining and milling rate will increase from 1,200 tonnes per day to 2,000 tonnes.

All-in sustaining costs should drop by 30 per cent to $534 per ounce once shaft construction is done.

"Island Gold has been a tremendous acquisition for Alamos Gold," said company president John McCluskey in a July 14 news release.

"We acquired Island Gold in 2017 at a cost of approximately $600 million when it had 1.8 million ounces of mineral reserves and resources. This high-grade deposit has more than doubled to 3.7 million ounces and we expect further growth yet. The Phase III expansion study showcases the growing value of Island Gold.

Ongoing discoveries from the company's intensive exploration program suggest Island Gold will be a consistent gold producer for decades to come.

The company has invested heavily in exploration drilling over the last three years to add more ounces to the 9,750-hectare property.

Alamos budgeted $21 million for exploration in 2020 to conduct 76,000 metres of surface and underground drilling on gold resources that were closest to the mine, while also conducting 10,000 metres of step-out drilling to evaluate some targets further out.

The company released more high-grade intercepts on July 13 that McCluskey said demonstrates the "significant potential for further growth in mineral resources and reserves and upside to a phase three expansion."

McCluskey added the size of the deposit has doubled since the 2017 acquistion, now bringing the total estimated ounces to 3.7 million.

The company said the shaft expansion shouldn't require a lengthy environmental assessment review as most of the permitting requirements fall within the provincial government's jurisdiction.

The proposed shaft will be located just southeast of the existing mine portal and processing mill, to better access deeper, higher-grade portions of the ore body.

The shaft will be sunk to 1,373 metres but could be further deepened as the deposit is still evolving. The ore body appears to be plunging and extending to the east. The shaft will be capped by a 59-metre steel headframe.

Worker accommodations on surface are also being enlarged and upgraded to accommodate contractors. A new kitchen facility and bunk house is in the works to acommodate 262.  A new administration building is going up, along with expanded warehousing.

Island Gold was temporarily shuttered on March 25 due to the global pandemic and brought back online in May.

Alamos also operates the Young-Davidson Mine near Matachewan and runs the Mulatos Mine in the Sonora State of Mexico, along with having a stable of other mineral projects in the development pipeline in Canada, Mexico and Turkey.

As one of the company's flagship assets, Island Gold was labelled by management last winter as one of its "catalysts" in what is to be a "transformational year" for the miner.

Argonaut Gold, to the west, has plans to bring the former Magino Mine back into production as an open-pit operation.

The news also puts the nearby town of Dubreuilville in the driver's seat as the community is making moves to capitalize on the spinoffs of the growth and development at both projects.