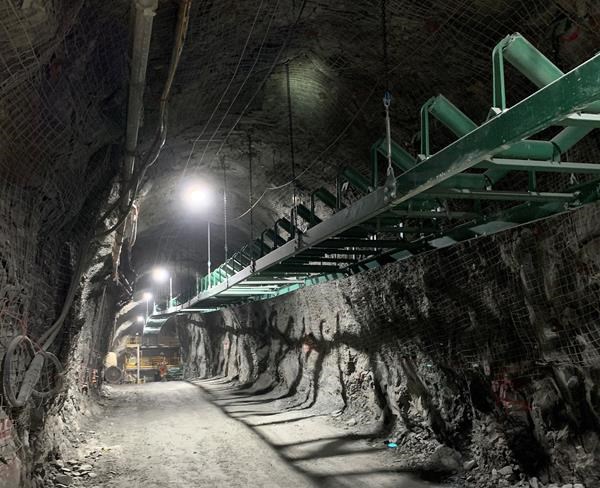 New conveyor installed at the Young-Davidson Mine near Matachewan. (Alamos Gold photo)

The Toronto-based mid-tier miner released its final quarter and year-end results on Feb. 19, reporting net earnings of $96.1 million and record cash flow of $260.4 million from operations for 2019.

Year-end gold production from its three mines amounted to 494,500 ounces.

The expanding Island Gold Mine, near Wawa, showed dramatic improvement in posting a record 150,400 ounces produced, up from 105,800 ounces recorded in 2018.

During the fourth quarter, Island Gold produced impressive results with 38,600 ounces, an increase from the 29,000 ounces recorded during the same time the previous year.

Young-Davidson produced 48,000 ounces of gold during the fourth quarter and was lauded by Alamos for exceeding its budgeted mining rates, at 7,000 tonnes per day, for the fourth consecutive quarter.

That mine's quarterly production was down, compared to 2018, as underground construction of the Lower Mine continues. The company said everything's on schedule to wrap up by June.

“We reported a solid fourth quarter and 2019," said Alamos president-CEO John McCluskey in a statement.

"We met our production guidance for the fifth consecutive year, and we met our cost guidance with a 10 per cent reduction in total cash costs from a year ago. Stronger gold prices and lower costs drove a 40 per cent increase in operating cash flow."

Alamos is labelling 2020 as a "transformational year," and is looking at properties like Island Gold to be one of its "catalysts."

An extensive exploration drilling program in 2019 resulted in some new discoveries, which translated to a 21 per cent increase in mineral reserves, totalling 1.2 million ounces, and a 46 per cent jump in inferred resources to 2.3 million ounces.

Close to 1,000 metres of drift development was completed.

A study for a third wave of expansion at Island Gold is due out in June.

Company officials are convinced the mine has the legs to be a long-term producer.

"On the back of another substantial increase in mineral reserves and resources at Island Gold, it is clear the ore body is evolving into a world-class deposit," added McCluskey.

"A Phase Three expansion study will be completed in the second quarter and is expected to showcase a larger, highly profitable and longer-life operation. The lower mine expansion at Young-Davidson is on track for completion in June after which we expect to transition to strong free cash flow growth."

Besides Young-Davidson and Island Gold, Alamos runs the Mulatos Mine in the Mexican state of Sonora, and has a stable of mine developments in the pipeline in Canada, the U.S., Mexico and Turkey.