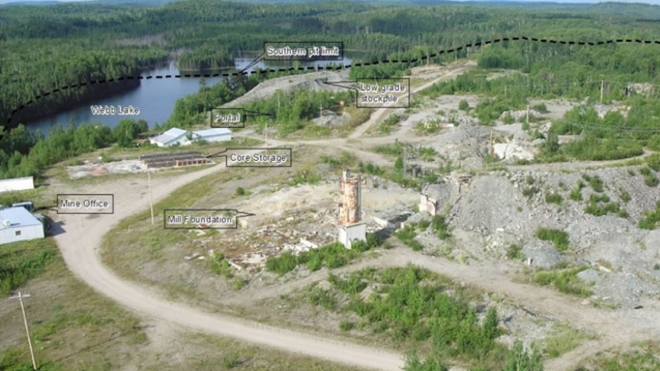 Argonaut Gold has cleared a major regulatory milestone on the path toward carving out an open-pit mine outside Dubreuilville.

But Garden River First Nation, a community near Sault Ste. Marie with traditional territorial claims on the land to be developed, isn't throwing its support behind the proposed Magino Mine project.

The community wants to derive some of the project's spinoff benefits through an impact-benefit agreement (IBA) with the Toronto-based mining company, the same type of agreement that's been offered to other area First Nation communities.

Argonaut announced in a June 11 news release that it's completed the Schedule 2 amendment of the Metal and Diamond Mining Effluent Regulations under the federal Fisheries Act, which involves consulting and getting approval from area First Nations and members of the public.

"From a permitting perspective, the completion of the Schedule 2 process significantly de-risks the Magino project and makes it much more attractive to potential joint-venture partners and project financing lenders," said company president-CEO Pete Dougherty in a statement.

"We thank the local communities for their continued support for the project. Argonaut believes that the Magino project can be an important local employer in Northern Ontario."

Magino is a proposed open-pit gold mine 10 kilometres southeast of Dubreuilville and 195 kilometres north of Sault Ste, Marie.

Argonaut Gold operates two open-pit gold and silver mines in Mexico with two more advanced properties in the development pipeline. Magino is their only Canadian project.

Argonaut acquired the Magino property from Prodigy Gold in 2012. Prodigy is now a subsidiary company.

Back in January, Garden River issued a news release to company shareholders stating their opposition to the mine project in their traditional territory.

In a strongly worded Notice of Assertion, Garden River said the company has refused accommodation through an impact-benefit agreement on the Magino project. The area around the mine, the First Nation said, holds significant cultural, traditional and historical value.

Garden River is a 20,703-hectare reserve, three kilometres east of Sault Ste. Marie, and about a three-hour drive from the future mine site. But the leadership contends their traditional territory stretches north into the Wawa-Dubreuilville area based on their research and the oral history of elders.

"We're asserting our jurisdiction and our ability to negotiate."

Talks between the mining company and Garden River on an IBA have been testy since 2018 after what the previous band council and adminstration felt at the time was an "insulting" proposal from the miner.

Rickard, who couldn't be reached for comment, said last February that the company reached out by email hoping to "reset the relationship."

Sometimes revenue-sharing opportunities with the communities are included in these agreements if an exploration property becomes a producing mine, and sometimes partial ownership in the company is included through the issuance of shares.

Rickard said last winter the community would be receptive to the opportunity to secure jobs in the mining industry or take part in resource revenue sharing.

Usually the specific details of IBAs, struck between a mining company and an individual First Nation, are kept confidential. The provincial government is not involved as the negotiations and any subsequent deals from these discussions are considered private.

With Rickard not available, Richard Perrault, Garden River's environmental coordinator, responded by email: "As of date, Garden River First Nation has not signed off on any IBA nor has Garden River signed any letter of support for permits issued to the Prodigy project with the Magino Mine near Dubreuilville."

Perrault said the First Nation will make further comment at a later date.

The company's plans are for an open pit and processing mill on the 2,213-hectare property, which once hosted a former underground gold mine and tailings dump.

The mine has a projected 15-year life with about 150,000 ounces of gold expected to be produced during the first five years of production.

The Wawa-Dubreuilville area is an emerging gold belt with one of the industry's most profitable and highest grade gold operations in Alamos' Island Gold Mine to the east and Wesdome's Eagle River Complex to the northwest. In between those operations, and to the south, is a plethora of exploration and staking activitity by a slew of junior mining companies.

Magino was given the federal environmental greenlight to proceed in January 2019.

But the company hasn't made any decisions on mobilizing for mine construction until all the necessary permits are in place and development financing arrangements are made.

Argonaut expects to make a decision on advancing Magino during the second half of this year.

Building the US$321-million mine would take 24 months, create 500 to 600 construction jobs, and employ 350 when the mine is in commercial production.