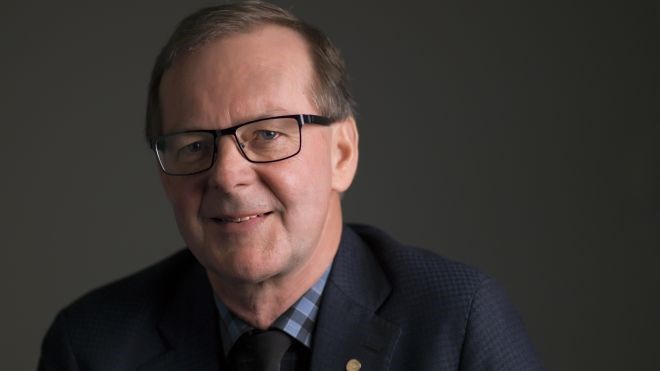 The Thunder Bay architect is at the forefront of the movement in architecture to help engineer social and environmental change.

“We need as a profession to lead,” Stephenson said. “Having this broader vision and this broader focus about the social and environmental work that we do is really important.”

Stephenson has taken many opportunities to lead, getting involved in several local, provincial, and national organizations. Most recently he became president of the Ontario Association of Architects (OAA) in January 2017, taking a partial leave from the firm to give back to the profession.

“Leadership is all about the work you do and how you walk the talk,” he said.

Originally from Richmond Hill, Stephenson graduated from the University of Toronto before moving to Thunder Bay where the “real winter” is.

He had planned to move around the country after a few years, but co-founded his own firm (which eventually evolved into FORM) and ended up staying. He said that there are opportunities in Northern Ontario that aren’t available in big cities like Toronto.

“As a young professional, here you’re thrust more quickly into a leadership role,” he said. “When you’re in Toronto as an architect, you’re one voice out of 2,000. Half of the profession (in Ontario) practise in Toronto. The opportunity to lead is harder to come by.”

Stephenson has “walked the talk” when it comes to environmentalism for about 15 years.

He has been an active member of EcoSuperior and EarthCare (previously EarthWise) Thunder Bay.

Professionally, he developed a desire to really consider the environmental impact that architecture has throughout the industry, particularly in reducing the carbon footprint of the entire construction process. Stephenson also helps clients reach Leadership in Energy and Environmental Design (LEED) certification, reducing a building’s energy use and its overall carbon footprint.

“Every project is important, no matter if it’s a back porch addition on your house or a major public hospital. It is an opportunity for leadership and for making the urban environment a better place,” Stephenson said.

As OAA president, Stephenson is overseeing upgrades to the association’s headquarters in Toronto to make it more energy efficient and carbon neutral.

He said that currently the building is rated at 450-500 ekilowatt hours per square metre per year (the “e” in this case represents all energy converted to equivalent electrical energy).

To put that in perspective, the average new office building built today uses about 160 ekilowatt hours. The upgrades, including solar panels and geothermal systems, should reduce that to about 70 ekilowatt hours, he said.

It’s an aggressive goal, but again one that walks the talk.

Architects can play a role in social change as well, Stephenson said.

He is a vocal proponent of anti-racism, and sees architecture as one of the ways that he personally can effect change.

“The most tangible, visceral symbol of (the residential school system) is a building that was designed by an architect,” he said.

“In my own work with the OAA, I’ve been trying to advocate for a greater appreciation and recognition of the First Peoples of the country.”

Part of that recognition is designing buildings that are more relevant to the people who live and work in them. Stephenson stresses the importance of, for example, working closely with First Nations to find solutions together that better meet their needs.

“If you look at the legacy of colonialism, you’ll find a lot of imposed architectural solutions that are not appropriate,” Stephenson said.

“As a profession, we have to address this kind of reconciliation more directly than we have.”

It’s this kind of positive change that Stephenson strives for every day.

“What being the owner of a practice and president of the OAA has taught me is that there is power in your voice when you’re in a leadership role. We should be not afraid to speak up about issues that are important.”