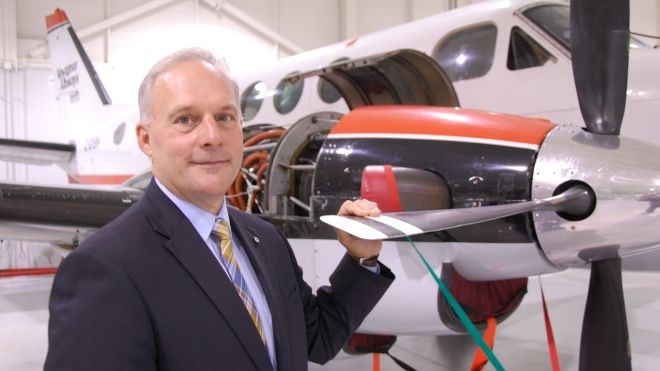 George Burton’s career has spanned the public and private sector and both ends of Ontario, but in recent years, he thinks it’s come “full circle.”

Born and raised in Chalk River, halfway between North Bay and Ottawa, Burton’s first move after high school was to Canadore College in North Bay to study recreational leadership.

In 2010, nearly 30 years and a few gigs later, Burton returned as the president and CEO of the same college where it all started.

“I came to Canadore on a school visit and loved North Bay almost immediately and decided to come to school here,” explained Burton.

“I knew I wanted to continue my education and thought I’d try college first. If I liked it I’d continue on, and if I didn’t, I’d finish up my college program and go to work.”

Burton wound up liking it and after graduating from Canadore, he headed to Lake Superior State University in Sault Ste. Marie, Mich. to complete a bachelor of science in sport and recreation management, with a minor in business.

That minor gave Burton some flexibility that came in handy when he graduated.

He wound up working in Toronto at a carpet manufacturing plant where he worked on the production floor and supervising.

“This was during the Reagan time in the States, so there was a bit of a recession, and jobs were hard to come by,” recalled Burton. “I was there for a good period of time, paying off student loans, making some money.”

Fortunately, a job in his field opened up at Canadore in 1985, marking Burton’s first return to the region.

He worked as a staff member in athletics for just over five years before heading back down south to work at Toronto’s George Brown College as the director of management and student information services and registrar.

After another five years, he was recruited away by Canada Trust in the business strategies unit.

That was followed by a period in media buying and selling product development, but in 2005, Burton made the decision to return to education at Loyalist College in Belleville.

“I knew I was always going to go back to education. I had a grand plan, probably the only one I ever had,” said Burton. “When I was in education, I always thought I needed to go into the private sector to even out my experience.”

Six years later, another change was in the cards and in 2010 Burton had the opportunity to move back to North Bay for the position of president and CEO.

“I kind of had a feeling I would return, with a healthy degree of uncertainty,” said Burton. “You never know where opportunity will take you. That’s where the luck comes in, but I always had an interest in what the North has to offer.”

The return was a positive one for Burton, who finds the region has a unique climate, and not just in terms of the weather.

“The North is known for being highly innovative,” said Burton. “And, it’s all about the relationships you make in the North, nobody does it alone.”

At Canadore, Burton thinks their most successful programs harness this innovation.

ICAMP (the Innovation Centre for Advanced Manufacturing and Production) is a not-for-profit that pairs academic research with industry partners. Burton describes it as a “a sandbox for companies.”

In typical Northern fashion, it was hatched on a paper napkin with some staff.

Their aviation centre, healthcare initiatives, and even digital post-production film initiatives all illustrate that dedication to innovation, and what Burton calls their “solution focused rather than problem focused” attitude.

Besides his role at the college, Burton spends time with his wife Virginia, is active in the local community (he’s an honorary colonel in North Bay), and spends time enjoying the great outdoors, to a degree.

“I have to admit I’m not a big fan of the cold, but I do enjoy the fresh air, being outside,” laughed Burton. “And I’m a terrible golfer but I enjoy it.”

Despite the cold, there’s certainly enough in North Bay to keep Burton around.

“The thing that I like is that people in the North want to be here, we could live anywhere and we make a choice to be here, it speaks to a common element we all have.”