Sudbury is one of the sunniest cities in Ontario, but Douglas Morrison saw little of that light when he moved there in the 1980s.
Feb 7, 2018 3:00 PM By: Ella Myers 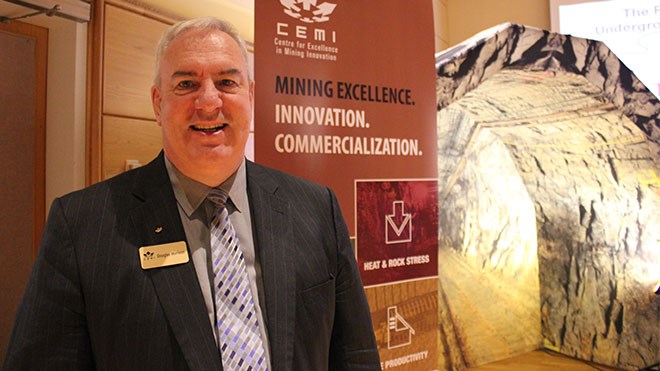 Sudbury is one of the sunniest cities in Ontario, but Douglas Morrison saw little of that light when he moved there in the 1980s.

The president and CEO of Sudbury’s Centre for Excellence in Mining and Innovation (CEMI) moved to Canada in 1981 to put his mining engineering degree to use in the booming industry.

“The first 10 years of my life here in Canada working I spent virtually underground.” he said.

The passion that initially took him underground would carry him onto other roles that and allow him to travel the globe later on. But Morrison values those early days underground.

“I thought working underground was a huge thrill,” said Morrison.

Morrison grew up in Scotland’s coal mining country, but he always gravitated towards metal mining.

When Morrison graduated with a master’s in rock mechanics and excavation engineering in Newcastle in 1981, he was a rare find, finding a job almost immediately at Sudbury’s Falconbridge.

“It was an exciting place to come to work in Sudbury in the mines. It was a big, big change, and I was young and adventurous.”

After five years, Morrison moved on to INCO where he worked as the superintendent of rock mechanics and mine design and research from 1986 to 1994.

While Morrison grew up learning about the dangers of coal mining, his time at INCO was spent mitigating those risks in metal mining.

“A lot of the work that was done to make [metal mining] possible and safe was done by INCO,” said Morrison.

“The mining companies collaborated to make the mines safer, and by being safer they became much more productive and much more profitable.”

In 1994 Morrison moved again, this time to Golder and Associates where he was the second employee in the Sudbury office of the Ontario-based engineering consulting business.

His role at Golder took Morrison around the world to Australia, Peru, Brazil, Chile, and even down south to live and work in Cambridge, Ont. for a time, but he was always relieved to come back to Sudbury.

“I absolutely love the North. When you come North from the other way, it’s always a relief,” said Morrison. “The winter times can be very hard but everywhere in the world you can find beauty, but this place has a lot of it.”

Morrison especially appreciated that beauty while raising his three children here in the 1980s and 1990s. He sees benefits to the region beyond the landscape too though.

“If you’re on the hinterland of society you have to be creative just to get by, because we don’t have the same resources,” said Morrison.

“It’s a very creative place; we have a lot of creative people in the arts but also in other industries.”

The focus of the creativity in Northern Ontario has changed since Morrison first came on the scene in the 1980s. He said he’s seen massive growth in mining supply and service companies, and a move towards marrying academic research with commercialization.

These days, Morrison is pushing this direction in his role at CEMI.

“Just doing the research is certainly beneficial but it doesn’t have an impact on industry unless commercialization is also possible and we recognized there was a gap, very few companies were trying to do the innovation of commercialization,” said Morrison.

“We’ve made the transition to a very much commercial focus and now we hope to see the kind of funding coming through that allows us to encourage companies to build prototypes and scale up so they become much bigger.”

In the next few years, Morrison would like to see these local organizations branch out and do more international sales.

Today, 75 per cent of jobs in the mining industry are actually in the service and supply sector, rather than underground where Morrison started. But that start is what brought him to where he is today, and something he credits with shaping his outlook.

“I’m proud of having had the opportunity to work in these mines and live most of my career in Northern Ontario, it’s a very important part of my adult life.”

Timmins could be hosting a monster nickel deposit
0

OPINION: There is no he-covery that solves a she-cession
0