A proposed upgraded transmission line supplying a bigger pipeline of power from northeastern Ontario to the northwest is expected to bring greater reliability of supply to a region with bright prospects for major industrial development.
Jun 15, 2015 6:45 PM By: Northern Ontario Business Staff 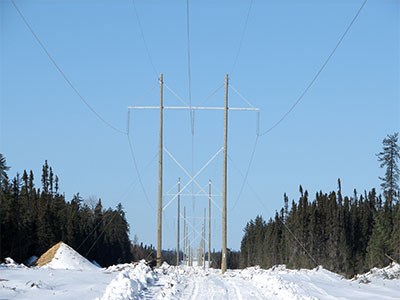 A proposed upgraded transmission line supplying a bigger pipeline of power from northeastern Ontario to the northwest is expected to bring greater reliability of supply to a region with bright prospects for major industrial development.

A proposed upgraded transmission line supplying a bigger pipeline of power from northeastern Ontario to the northwest is expected to bring greater reliability of supply to a region with bright prospects for major industrial development.

The East-West Tie Transmission Project was identified in 2010 in the Ontario Power Authority’s (OPA) Long Term Energy Plan as one of its top five priority transmission projects.

With NextBridge Infrastructure chosen as the developer, the project involves construction of roughly 400-kilometre long, double-circuit 230-kilovolt (kV) transmission line along the north shore of Lake Superior between Wawa and Thunder Bay. The line would parallel an existing 230-kv corridor.

The targeted in-service date was originally scheduled for the first half of 2018, but concerns over routing of the line and a slow-down in mineral exploration may extend that date by two years.

The OPA believes there’s merit in allowing for additional time and that it shouldn’t impact mining and other infrastructure projects in region.

Alternative routes are being considered to go around protected areas like Pukaskwa National Park, rather than go through them and there are other discussions with area First Nations on how the line should be routed before the project’s environmental assessment study is submitted to the Ministry of
Environment.

John Mason, the Thunder Bay
Community Economic Development Commission’s mining services manager, suspects the routing issue through federal and provincial parks could be a factor, in his estimation, that could push the in-service date further back to 2022.

And that’s cause for concern if the sluggish mining industry suddenly starts to rebound.

Despite a tough financing market to raise money for exploration and mineral development, a 2013 mining readiness study identified as many as 10 advanced-stage projects that could become mines over the next five years in the northwest. The forecasted power demand ranges between 400 and 700 megawatts.

Rubicon is only permitted for 5.3 megawatts, said Mason, and will need 15 megawatts within a few months as the gold miner seeks to commission a processing mill in the first half of 2015.

“There’s a supply issue into Red Lake, but also a transmission issue.”

The same concern exists in the Pickle Lake and Greenstone areas which are saddled with antiquated systems in place instead of modern looped lines.

Mason said both the Ontario Power Authority and the Ministry of Energy are working on a long-term energy plan to supply more power and upgrade the transmission capacity to the Red Lake gold camp, north of Dryden.

“But the supply they’re thinking of is going to originate off the East-West tie, coming from northeastern Ontario.”

To Mason, that’s fraught with uncertainty in addressing the issue of a secure and reliable supply that won’t be compromised by weather, and if there will be enough for the long term.

Mason said the history of the north shore line is characterized by frequent outages caused by extreme weather and ice storms.

With the province’s decision to convert the 306-megawatt Thunder Bay Generating Station from burning coal to wood pellets, and position it as a back-up facility, he’s not confident that there are many alternative sources of power available should the industry suddenly rebound.

The Ontario Power Authority suggests there are other options by importing power from Minnesota and Manitoba.

“If you’re between a rock and hard place, you have to do it, but it’s not the most desired approach,” said Mason. “Essentially, you could be buying coal-produced power (from the U.S.) which defeats the purpose of Ontario being off of coal.

“But as we ramp up between 2015 and 2020, there are going to be a lot of requirements and we don’t think the East-West is going to be utopia. That’s not going to the case, we need a variety of solutions in our kit bag and we think assets like the Thunder Bay Generating Station are pretty critical.”

OPINION: Government is the one holding up progress on passenger rail
0