Carving out more passing lanes may be the answer to improve motorist safety on Highway 11, says the Temiskaming Shores and Area Chamber of Commerce.
0
Aug 19, 2016 2:34 PM By: Ian Ross 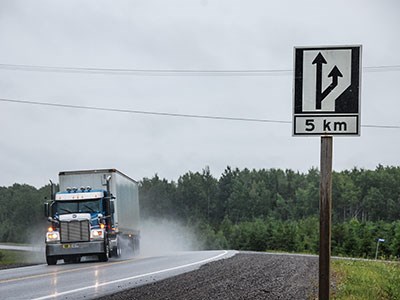 Adding more passing lanes on Highway 11 may be the solution to avoiding fatal head-on collisions.

Carving out more passing lanes may be the answer to improve motorist safety on Highway 11, says the Temiskaming Shores and Area Chamber of Commerce.

A recent meeting with the Ministry of Transportation (MTO) confirmed what the chamber’s highway committee chair Helene Culhane already suspected, there’s just not the traffic volume to warrant four-laning the vital north-south link.

“We pretty much heard what we expected to hear,” she said, “that there’s is no way of four-laning all the way through, so we’re going to be concentrating more on more passing lanes and finding some way to get our traffic flowing safer.”

Concerns about the safety of the highway emerged in 2014 when former Nipissing-Timiskaming MP Jay Aspin opined that he wanted the federal and provincial government to begin a dialogue to upgrade the 160-kilometre stretch of road between North Bay and Temiskaming Shores to improve safety and relieve congestion.

Aspin voiced his concerns after a long-time friend, Andre Lamothe, owner of Temagami Marine, was killed in a car accident on the highway near New Liskeard in 2014.

Fatal accidents have often closed the road to traffic, delaying goods and supplies from reaching businesses in the Temiskaming area in a timely fashion.

He suggested the local chamber take the lead and lobby for a 400-series highway, noting the work of the North Bay chamber was instrumental in four-laning the southern half of Highway 11 between North Bay and Huntsville.

The two-lane highway sees frequent cottage traffic in the Temagami area during summer and considerable commercial truck volume in winter for cross-Canada truckers wanting to avoid the storms and closures on Highway 17 on the eastern shore of Lake Superior.

“It is a concern among residents that the highway has become more risky,” said Culhane. “It’s the head-ons (collisions) that are our biggest concern, safety and lives. And when that highway is closed, the truckers are not coming through to deliver our goods…and when they don’t, our economy suffers.”

With no one leading the effort, Culhane, who works as the chamber’s membership and event coordinator, formed the Going the Extra Mile committee to champion the cause.

The committee includes the mayors of Temiskaming Shores and Cobalt, chamber directors, and area businesses like Demora Construction.

Culhane said the highway doesn’t produce the traffic counts – of more than 10,000 vehicles daily – to warrant four lanes, and its scenic and rocky landscape is also a drawback to widening the road.

“There’s no room. We have such beautiful, pristine lakes. Our beauty is also our downfall because there are places where you can’t four-lane near a lake. And we don’t want to bypass towns like Temagami and Latchford. I’m a Cobalt girl. I know what bypassing a town can mean to it.”

Besides pressing for more passing lanes, Culhane and they’ll be setting up another round of meetings with the MTO and the Ontario Provincial Police this summer to determine the cause of these accidents and what measures can be taken to avoid or reduce them, such as adding highway dividers.