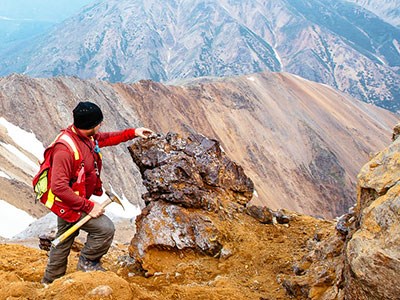 Brixton Metals CEO Gary Thompson, shown at his Thorn property in B.C., is eyeballing the silver potential of a past-producing Temiskaming silver mine.

Cobalt, famed for its 1903 silver rush, is regarded as the birthplace of Canadian hard rock mining.

But it’s all new territory for Gary Thompson of Brixton Metals who’s hoping to rekindle some of that magic with an exploration program to the north of that historic mining camp.

The CEO of the Vancouver junior miner is on the hunt for high-grade silver around the former Langis underground mine, 15 kilometres north of Temiskaming Shores.

“We’ve been busy getting up to speed on what’s happening with the whole camp,” said Thompson. “I’m just amazed at the amount of history there.”

Brixton finalized the acquisition of Langis Mine from Canagco Mining Corp in early February for $55,000 cash and 3.2 million in common shares.

His company is meticulously gathering historical and past geophysical data of past mining and exploration work to build a 3-D model as they methodically work toward a preliminary economic assessment (PEA).

“We’re in the process of building our database, taking as much of that paper data into digital format.”

A former 10.4-million ounce producer, Langis was part of the Cobalt silver boom in the early 1900s. Beginning in 1908, it operated intermittently until 1989-90 when silver prices tanked and Agnico Eagle closed the operation.

Cobalt once spawned 100 mines in the town limits in its heyday, but there were operating mines in the farming areas of the Great Clay Belt.

Most of the past-producing silver properties around Cobalt are locked up by Agnico-Eagle — the company first cut its teeth mining in the area — which is in the process of remediating the old sites. However, Brixton did land the former Hudson Bay silver mine, northwest of Cobalt, in late April.

“This was a past producer — 10.5 million ounces, 25 ounces per tonne. In conversation with people that worked there, there’s still ore in the floor that they never necessarily mined out, and we’re just getting started here.”

Records show the silver recovery rates ranged from 88 per cent to 98 per cent.

“Our optimism comes with the fact that they produced successfully, a high recovery rate with very high grades, and we believe there’s more there,” he said.

The mine workings ranged between 100 and 200 metres, “fairly shallow” by today’s standards, Thompson said.

Brixton has launched a 2,500-metre drill program this summer to test those 25-year-old targets, while trying out a few theories of their own.

Initial drill results were expected in July. Should those yield promising results, expanding it into a 12,00-metre program later this year is a “real possibility.”

“We’re even looking at below or above some of the workings — in some of the discussions with people that actually worked underground there — they’re saying there’s still ore there,” he said.

“We’ve met quite a number of people that worked in the mine. It’s been quite interesting. There’s a wealth of information that’s still around.”

Their research includes making a trip to the Cobalt Mining Museum, a valuable resource that Thompson wants to dive into.

“I’ve spent some time there and there’s some archival data that we haven’t got to.”

He finds working in northeastern Ontario is a vastly different experience than Brixton’s remote Thorn gold-silver project in the mountains of northwestern British Columbia.

“Everything you really need to build a mine is there. The drilling costs are considerably lower than most places around the world.”

The population is more mining-savvy, too. Brixton signed an exploration agreement with Temiskaming First Nation in May, earmarking 1.25 per cent of its exploration budget toward “community benefits,” he said.

“Surprisingly, compared to some of our other First Nations we’ve been dealing with, it’s been quite an easy deal to do. They’re pretty pro-development and want to see something happen.”

Thompson remains optimistic Langis is a great prospect, which came at a good price.

Rather than spend scarce capital on exploration drilling in B.C., a consultant brought them Langis.

“I hadn’t heard about it. I wasn’t familiar with Langis and the Cobalt camp actually, largely because you haven’t heard any news about this area for 20 to 30 years. It was off the radar for a lot of people I think.”

“I think we struck a great, reasonable deal. At that time we didn’t have a lot of cash. Fifty-five thousand cash and 3.2 million shares seemed like a pretty reasonable deal.”

In the near term, Thompson envisions as a small-scale operation with a goal of reaching a target between 3 million and 5 million tonnes.