The Grant Farms ’ sprawling grain elevator facility north of New Liskeard is an impressive sight. What’s even more impressive is that nothing was there just a few years ago.
0
Apr 4, 2013 5:32 PM By: Liz Cowan 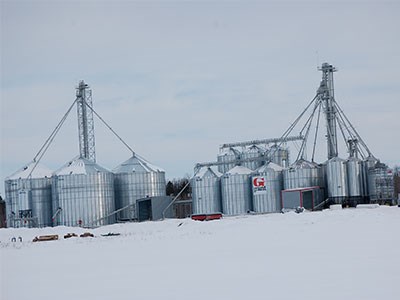 Grant Farms' grain elevator facility stands out against the field surrounding it.

The Grant Farms’ sprawling grain elevator facility north of New Liskeard is an impressive sight. What’s even more impressive is that nothing was there just a few years ago. Owned by Peter Grant, the first phase of the facility became operational in the summer of 2011.

“We started with a fairly small elevator and then realized quite quickly that the marketplace could handle more opportunities,” said manager Stephen Chenier. “We increased our size and I feel very comfortable that our three elevators should be able to keep going.”

It employs about 40 people, and an extra 15 during seeding and harvesting.

“These are new jobs that weren’t there three years ago,” he said.

With a decline in the number of beef farms in the area, more pasture land has been turned into producing land.

Grant Farms has about 10,000 acres, which it plans to seed this year. Land was rented to other farmers in the past, but when the leases expired, Grant decided to get into farming.

The first crops were harvested in 2010. “I don’t think we are the biggest but we are on the higher end of farms in this area,” said Chenier. “We are constantly doing land reclamation on our own lands. (Grant’s) philosophy has always been to improve the land and not just take the best land and pay top dollar for it.”

Land that Grant has purchased has been improved and tile drains installed.

“We put in a million feet of tile last year. It is imperative to do this in this area and market. It is wet up here. If you don’t have tile drain, especially with the winter we have had, it will take an extra three to four weeks before you can get on the land, and you have lost all that good seeding season when everything grows fast,” he said.

The operation is growing wheat, barley, canola and soybean. New this year is 150 test plots, in conjunction with its suppliers, to do some testing of products and ideas. In July, an open house will be held to allow area farmers to talk to the suppliers.

“The test crops will include different heat units of corn, and beans, to see where the threshold is, and what beans will actually grow up here and what won’t. It will also include different products that we are putting on the crops, like chemicals and fertilizers, and all different variables that we can play with to test out,” Chenier said. “Then we will publish that data by putting it on our website for the farmers to use. “(Grant’s) goal has always been to improve the availability of products for the local farmers. He would like to see everyone do well and that is our mandate, to try to improve farming in Northern Ontario.”

The grain elevator facility is licensed, allowing it to buy and sell grain, and is available to anyone. Customers come from as far as Kapuskasing, northern Quebec and the North Bay area.

“We have a certified scale, and everything is up and running. This year we installed an intensive cleaning system so we can clean the grain, because we are looking at the potential for export markets down the road,” he said.

If no elevators were available in the area, farmers would have to ship their grain to Toronto. Many don’t have enough production to justify storage on site, so they have to have a truck available for shipping right after cropping.

The facility began with a shop, which was built in 2010, followed by the first elevator and the second phase which added two more last year. A fertilizer shed was opened last spring but it has since been expanded.

“We have a fertilizer plant with a full bagging line, so we can bag fertilizer in any quantity size we want. Our third phase is a pesticide warehouse,” Chenier said. “The way we designed the elevator system is that we can continue growing if we have to, but we would add bins and not elevation.”

Since the grain elevator facility is an open business, farmers will start looking in the spring to book their crop for the fall.

“They never know what kind of year it will be, so typically, you see a farm try to merchandise 25 per cent of their crop now, then they market the rest as the season goes. So if they have storage, they can put it in their bins, sit on it, and wait for the price they were looking for. If not, during the harvest season, they will call,” he said. “Or, they can use our facilities for storage and pay a monthly fee and make a deal when they feel the market is right.”

The grain purchased by Grant Farms is marketed to large wholesalers. The canola that is made into oil is used domestically and for export market. The spring wheat produced in the area is typically used in the flour and cracker market.

“This area is one of the largest producing areas for oats, in pretty much Canada,” Chenier said. “The weather is good for oats, and they grow big and plump. So we supply feed mills and food mills. “Farming has a huge impact on the economy in the area. A lot of people forget that without farming, the community would be a lot smaller.”