BonTerra Resources has created a 3D geological model for its Larder Lake property and plans to have an updated 43-101 National Instrument resource report ready for mid-2017.
0
Jul 26, 2016 6:27 PM By: Northern Ontario Business Staff 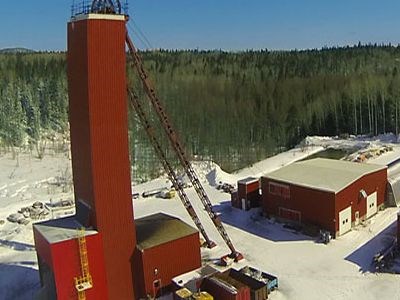 BonTerra Resources has created a 3D geological model for its Larder Lake property and plans to have an updated 43-101 National Instrument resource report ready for mid-2017.

The Larder Lake property hosts the Bear and Cheminis gold deposits and extends along nine kilometres of the Cadillac-Larder break between Kirkland Lake and Virginiatown.

The property includes the Kerr Addison Mine, which produced 11 million ounces of gold, and the Cheminis Property, which intermittently has produced 260,000 tons at a recovered grade of approximately 0.104 ounces gold per ton.

The last exploration drilling was done in 2012-2013 by Gold Fields.

“The Larder Lake asset contains a significant, large historical gold resource that BonTerra will be advancing over the next year and will also be examining its nine-kilometre exploration land package along the world famous Cadillac-Larder Lake Break Fault structure, which has already produced millions of ounces of gold,” said Nav Dhaliwal, president and CEO, in a release.

“We have recently completed an initial general 3D geological model highlighting the historical drilling and zones outlined to date and have now placed the new information on BonTerra’s website.”

Historical gold production and mine development at Bear Lake extends to 1,085 feet, with two shafts and underground workings on site.

BonTerra announced its acquisition of the Larder Lake property from Kerr Mines in March.