Take four long-time friends, add a passion for beer and adventure, let that ferment for a couple of years and the result is refreshing, unfiltered success.
Oct 29, 2012 3:19 PM By: Donna Faye 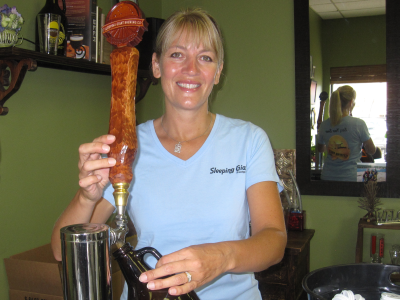 Take four long-time friends, add a passion for beer and adventure, let that ferment for a couple of years and the result is refreshing, unfiltered success.

The friends and business partners are building on their own enthusiasm for craft beer and the wider surge in microbrewing’s popularity in North America.

Sleeping Giant also fills a void left when Thunder Bay’s Great White North Craft Brewery closed its doors in 2008 after brewing for just over one year. Even though his ale was on tap at many local restaurants, owner Geoff Schmidt cited poor sales as the reason for the closure.

So far, Sleeping Giant has the opposite problem. With its beers on tap in nine local restaurants and steady sales at the brewery itself, it's barely keeping up with demand.

Even before it opened its doors at the Cobalt Crescent location in June, Sleeping Giant had already created a resounding buzz among beer aficionados. The company started tweeting regular updates as far back as September 2011 and an equally well maintained Facebook page wasn’t far behind.

Earlier this summer when Sleeping Giant posted on Facebook that its ales were kegged and ready for delivery to the Madhouse, customers were there within an hour.

It takes about one-and-a-half to two weeks for the brew to ferment and with only two fermenters, the brewery currently only has the capacity for brewing once a week. Still rather impressive, considering that, all but Kerry, have fulltime careers – Kerry left her job to work at the brewery – and both couples have children between the ages of nine and 12.

The partners are planning to expand their market in the region in the next year to year-and-a-half. To do that, they say they will need to hire staff, at least another brewer. They’re already getting set to purchase another fermenter next month. And once they start canning their beers, they will start looking at selling through the LCBO.

Their three flagship brews are the 360° Pale Ale, available year-round; Elevator Wheat, the spring/summer brew; and Skullrock Stout for fall/winter, which are sold to individual consumers in reusable 64 fl oz glass growlers.

Brewmaster Kyle adds various hop additions in the brew kettle that give the beers their bitter or aromatic qualities. He adds locally sourced honey to create the Elevator Wheat ale. The grains are even locally malted in Thunder Bay.

From the start, the group set a goal to educate consumers. “A lot of people don’t realize that there is a lot to learn about beer, how diverse beers are or how many styles there are,” said Kerry.

“Education happens as soon as a person walks in the door because they’re invited to go back and see how the beer is made. And then they taste, for example, a Belgian style pale ale. How many people in Thunder Bay have had the chance to try that?”

Mirella Amato, Canada’s first female cicerone (the beer equivalent of a sommelier), was on hand for the grand opening which was advertised as an evening of “Ontario Ales and Cheese.”

And at the end of August, the partners were in Duluth, Minn. exploring locations for a "North Shore Brewery Bus Tour" planned for January 2013.

Certainly not lacking in enthusiasm and creativity, the partners even managed to put a more positive spin on the “consume with moderation” warning. Their philosophy is: don’t just drink our beer; earn your beer with a balanced lifestyle.

People are asked to send in photos of how they “earned their beer” and every month one of the entries is selected for a prize.

Their goal is to encourage being active, mentally and physically, and living life as best as you can.

It seems they’re not asking anything of their customers that they aren’t already practising themselves.

“Our goals were to make good beer, pay our bills and maybe make a little bit of money,” said Drea.

“We want to be successful, but the reason we did it was ultimately just to have some fun, have some great beer and meet new people.”