The minimum wage might not be meeting Ontarian's minimum requirements. Nicole Beaulieu sees a day in the near future when the $11.25 minimum wage becomes a thing of the past.
0
Mar 15, 2016 8:25 PM By: Ella Myers 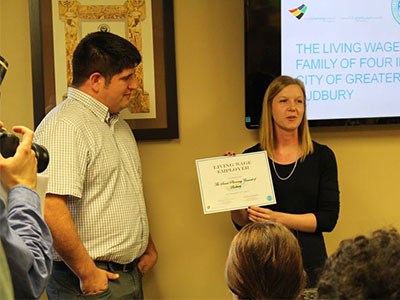 The minimum wage might not be meeting Ontarian's minimum requirements.

Nicole Beaulieu sees a day in the near future when the $11.25 minimum wage becomes a thing of the past.

The executive director of the Sudbury Workers Education and Advocacy Centre (SWEAC) is worried Sudburians can't get by on the current minimum wage of $11.25 an hour and still meaningfully engage in the community.

Between 1997 and 2015, the percentage of Ontario employees earning a minimum wage exploded from under three per cent to nearly 12 per cent.

The centre’s push for employers to pay a higher minimum wage has received funding for the next year to build on their existing capacity.

Formed in 2014, SWEAC with the support of the Social Planning Council (SPC), has introduced two campaigns aimed at raising the $11.25 an hour minimum wage by around $5.

“It's always a touchy subject, but we want to raise the floor without raising the ceiling,” said Beaulieu. “From the research we've done, it shows that the wage going up helps people spend more locally. Businesses shouldn't have to raise prices because they'll be making more.”

The first project is the Greater Sudbury Living Wage campaign, based on analyzing the community's unique circumstances and costs of living to calculate the minimum amount needed for an individual or family to cover basic needs like food and shelter with some degree of recreation.

SWEAC launched their living wage campaign in November, aided by a grant from the Atkinson Foundation.

“With this grant we can really get the movement off the ground,” said Beaulieu.

The living wage campaign relies on voluntary participation by local businesses. Beaulieu sees the campaign as “less about enforcement and more about doing it for the greater good.”

The Social Planning Council was one of the first living wage employers recognized in Sudbury, and Beaulieu hopes to see more jump on board over the next year.

“There a lot of benefits to the employer, you're attracting high quality personnel, and making sure the people who work for us are meeting their basic needs when they're giving us the majority of their time, creating a workplace where people are valued and they don't have to go out and look for a second job,” said SPC's executive director, Joseph LeBlanc.

The concept of a living wage has global traction and has taken hold in southern Ontario cities like Hamilton, whose chamber of commerce pays employees $14.95 an hour, and Cambridge, whose city council pays employees $16.05 an hour.

Where the living wage campaign is grassroots and voluntary, SWEAC's other project is the Fight for $15 and Fairness Campaign, aimed at passing provincial legislation mandating a $15 minimum wage across Ontario.

While it is less tailored to specific communities and comes in lower than Sudbury's living wage, it encompasses more details like enforced scheduling, paid sick days and fair workplace practices.

Beaulieu relates to many of her clients, having spent many years in precarious roles of contract work, temporary positions, part-time or on-call roles.

“We dabble in a lot of things,” said Beaulieu about SWEAC's upcoming plans for a bill about harassment and improved connections between local workers and legal education.

But, for the next year, SWEAC will be focused on the fight for a higher minimum wage, and advocating for the increasing number of workers impacted by it.

SWEAC is hosting a rally for $15 and Fairness at noon on April 15, at 555 Barrydowne Road in Sudbury. They will be addressing a $15 minimum wage, paid sick days, respectful workplaces and decent hours.