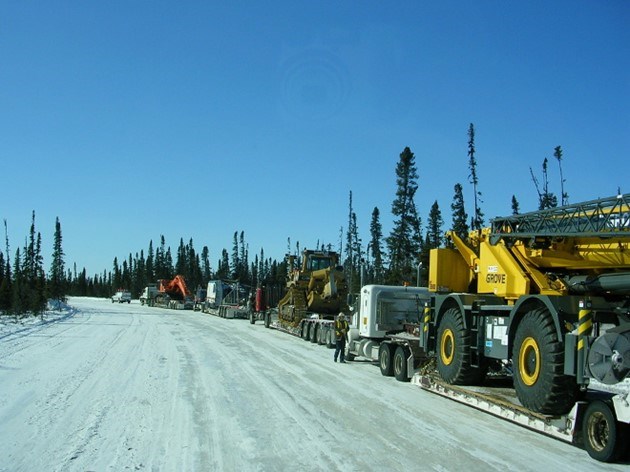 The first step in a provincial environmental assessment (EA) of a supply road to the Ring of Fire is underway.

Webequie First Nation, the community closest to the Far North mineral deposits, has initiated the EA study of a permanent road running from Webequie's airport to the fly-in exploration camps near McFaulds Lake in the James Bay lowlands.

The length of the proposed road is 107 kilometres. According to a document posted Jan. 25 on a community road project web page, the EA's terms of reference (ToR) are being prepared, which basically outlines the framework and the work plan for the study.

The ToR will be submitted to the Ministry of the Environment, Conservation and Parks for review this spring.

The actual environmental assessment, slated to start this year, is a three-year process.

Since September 2017, Webequie, as the road proponent, is tasked with selecting the route and doing all the consultation with the community, trappers, harvesters, and other land users.

SNC-Lavalin has been hired to provide the community with environmental and engineering support.

Besides assessing the potential adverse effects of the route, some preliminary engineering will be done to determine the types of bridges needed for water crossings.

Ontario's process is supposed to be running in coordination with a federal EA effort, but with Ottawa overhauling how it reviews major natural resource projects, it's unknown how this will impact the overall development of the Ring of Fire.

Noront Resources expects to start mine building in 2021 to be ready for commercial production by 2024.

The Webeque supply road is one of two corridors being planned to provide overland access to the future mine developments.

To the south, AECOM is working with Marten Falls First Nation on a north-south route that will move people, supplies and ore by road and rail.

The environmental assessment and engineering is being conducted on the first leg of that road, which would connect the remote community to the provincial highway system in the Aroland-Nakina area.

The province released funding for the Marten Falls and Webequie road studies prior to the start to the election last May.

No funding has been announced for the second leg of the north-south corridor that would run to the Ring of Fire deposits.

That would involve a crossing of the Albany River and other major rivers.

Rickford won’t stand for delays on delivering Ring of Fire infrastructure
Mar 5, 2020 10:34 PM
Comments
We welcome your feedback and encourage you to share your thoughts on this story. We ask that you be respectful of others and their points of view, refrain from personal attacks and stay on topic. To learn about our commenting policies and how we moderate, please read our Community Guidelines.