Rickford promises progress in the Ring of Fire 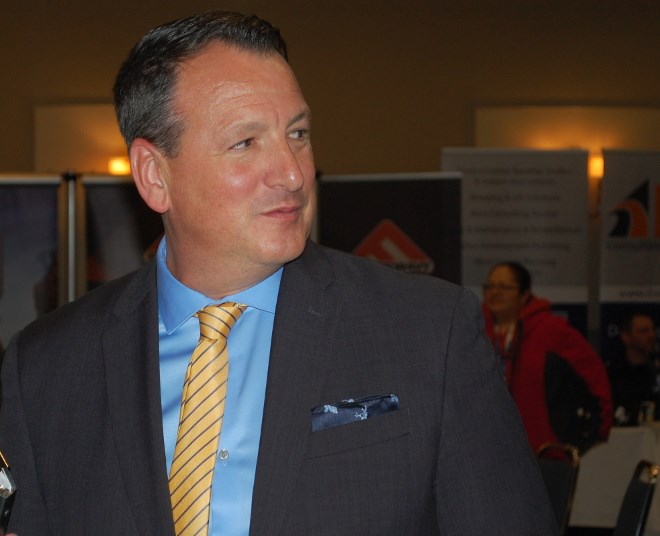 Provincial cabinet minister Greg Rickford offered a stay-tuned response to the government’s plans to advance the construction of an access corridor to the Ring of Fire.

The minister of Energy, Northern Development and Mines, and Indigenous Affairs was in Sudbury to reaffirm the Ford government’s commitment to opening up the mineral deposits in the remote James Bay region.

In his Jan. 23 remarks at the Procurement, Employment, Partnerships Conference in Sudbury, Rickford referred to the James Bay mineral belt as a “region of prosperity” that’s been “complicated and overburdened with bureaucracy.”

As a former board member of Noront Resources, Rickford said with $20 million already invested in the region, the Ring of Fire has been an all-talk, no-action exercise with no shovels in the ground after a decade of discussion.

Prior to the start of last year’s provincial election, funding was released for a road study and environmental assessment of the first leg of a north-south access corridor up as far as Marten Falls First Nations, about 100 kilometres short of the mineral deposits.

When asked when funding could be expected to be released for the environmental assessment of the second phase, Rickford said the government will deliver on this project with mining-related infrastructure announcements in the near future.

Rickford talked about forming a “coalition” of willing partners among First Nation communities and municipalities who support the construction of an access road as a “practical and pragmatic exercise” that will create jobs, generate revenue, incentivize business, and connect isolated Northern reserves.

In an interview, Rickford defined that coalition as those communities that want to lead the environmental assessment processes and view the access road as a “corridor of prosperity” that will allow new infrastructure and business opportunities into the region if the mines go into development.

He praised Marten Falls and Webequie First Nations, which have shown “extraordinary leadership” in leading the environmental assessment for the proposed north-south road.

“I haven’t heard from an Indigenous leader that I’ve spoken to from the local communities most proximal (to the Ring of Fire), or businesses and municipalities down here, who’ve displayed a certain level of frustration with the ways are done.

At the same time, Rickford said he planned to reach out to two First Nation communities that are wary of the environmental consequences of industrial development in the Far North.

Rickford, who once worked as a nurse in the communities of Neskantaga and Eabametoong, said he continues to have “great relationships with those communities” and expected to meet with Eabametoong Chief Elizabeth Atlookan within a week.

“We see way more opportunity. I hear them. They have a high level of frustration over the past decade and a half where there’s been a lot of talk and no action.”

Rickford, a former federal natural resources minister in the Harper government, attributed that feeling to promises made by Ottawa on programming, and not kept.

“Look I’ve been on the other side of that fence. I’ve built seven schools in seven years in those isolated remote First Nation communities, dozens of nursing stations and police stations, so as I said earlier, we’re going to take a pragmatic, practical approach to communities who want to get involved in the opportunity and move forward on economic prosperity for all our Northern communities.”

Rickford added the government remains “very eager” to revisit the controversial Far North Act, passed by the McGuinty government in 2011 without the support of Indigenous communities.

“We’ll have more to say about that in the not-too-distant future.”

He offered the same answer when asked about whether talks will be restarted on the mothballed Regional Framework Agreement, the Wynne government’s planning process with area First Nations on Ring of Fire development.

On sharing resource revenues from mining and forestry operations with Indigenous people, Rickford maintained that the previous government’s May agreement with 32 northeastern Ontario communities will be honoured and expanded to other Indigenous groups and Northern municipalities.

“A lot of money leaves Northern Ontario that’s generated from our resource sector and it doesn’t stay in our communities. We’re hopeful that, in addition to the existing agreements, we’ll be able to proceed with more resource revenue-sharing plans.”

Rickford expects to release more details “probably not in this budget cycle, but in the next one after that.”

In his remarks to a lunchtime audience, Rickford let it be known the mining industry has an ally in Queen’s Park that’s committed to opening new mines and wants to restore Ontario as a “top destination” for mining, forestry and manufacturing investment.

Being open for business in Ontario, Rickford said, “means having an energy advantage.”

To ensure mining thrives, Rickford said all affordable energy solutions are on the table, including the expansion of pipelines to feed natural gas into isolated mining camps.

After scrapping the Wynne government’s cap-and-trade carbon tax scheme last year, Rickford vowed to stand up against any federal environmental or clean-fuel legislation that increases cost to industry or attempts to kill large infrastructure projects.

Rickford stuck to the government’s red tape-cutting mantra in mentioning his trip with Premier Doug Ford to White River last fall for the ribbon-cutting to open Ontario's newest mine, Harte Gold's Sugar Zone.

The company was bogged down for seven years in provincial regulatory processes with the Ministry of Environment and Ministry of Natural Resources that might have lasted longer had the new government not intervened to get the mine opened.

“Folks, I’m here to tell you that that is not going to happen again.”

Rickford said leaders across the North have told him that they want to see resource projects advanced.

He expressed optimism about Ontario’s mining prospects, with Indigenous people being full partners in development and sharing in the business risks and rewards.

Rickford recognized the almost $10 billion in minerals extracted in Ontario in 2017, and the tens of thousands employed in the industry, including many Indigenous people in the North’s small towns and remote regions.

Rickford, who planned to meet Sudbury’s mining leaders for a roundtable discussion, called Ontario a “centre of mining expertise,” and praised the investments in mine automation, digital transformation, and companies eliminating diesel use by procuring fleets of battery-operated mobile equipment, such as Goldcorp’s Borden Lake Mine near Chapleau.