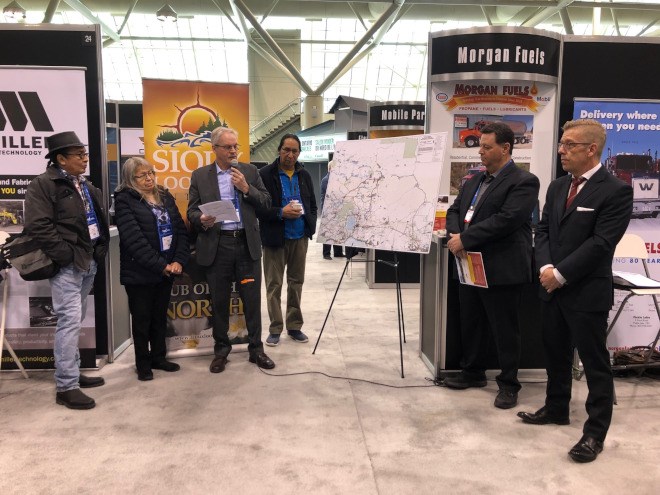 A group of northwestern Ontario communities and businesses want the province to resurrect a forgotten route into the Ring of Fire.

The newly formed East-West Ring of Fire Road Coalition appeared at the Prospectors and Developers Association of Canada mining conference, March 5, to advocate for an east-west road into the remote mineral belt.

In a news release, the coalition said it is seeking government support for the east-west route, which would extend from Highways 599 and 72 to the Ring of Fire.

The group contends this road will benefit a greater number of communities than the government's preferred north-south route – currently under environmental assessment – and would bring more economic spinoffs associated with the future chromite and base metal camp.

Two years ago, the former Wynne government proposed two routes into the Ring of Fire: an east-west road and a north-south corridor, the latter likely involving a mining ore-haul railroad.

The plan was to build the east-west route first, as a supply road into the Ring, while also connecting remote communities to the west and south of the mineral claims.

That route would roughly follow the winter road network and would be a less expensive endeavour than to the north-south corridor, which would involve major engineering work to cross a number of large river systems.

But that plan seemed to be discarded by the Wynne government as the 2018 provincial election approached.

With a regional negotiating process and road governance discussions with area First Nations showing no results, the Wynne government shifted gears and began making arrangements with individual communities that were deemed more receptive to development in the Far North.

That's led to funding starting to flow for a north-south route and a short supply road to start the environmental assessments and early-stage engineering, with the communities of Marten Falls and Webequie designated as the road proponents.

The shift in strategy has been adopted by the current Ford government, which is eager to make progress in the Ring of Fire, much to the disdain of some communities.

Ironically, the Progressive Conservatives, while in Opposition, supported the construction of an east-west road for a period of time.

Sioux Lookout has been a staunch supporter of the east-west road. And for a time, they had the support of Noront Resources, the leading mine developer in the region.

"We anticipate this route would lessen the environmental impacts (including wetland and peatlands) and avoid expensive, problematic large-scale water crossings.”