Over the last 16 years, beef production on Manitoulin Island has dwindled dramatically, thanks to a tangle of prohibitive food safety regulations and expensive off-Island shipping costs.
Aug 31, 2012 7:05 PM By: Lindsay Kelly 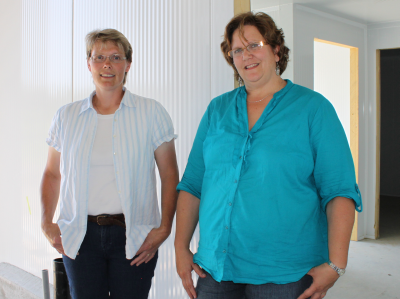 Birgit Martin (left) and Joan Brady, chair and manager, respectively, of the Manitoulin Island Community Abattoir, are overseeing construction of the 4,200-square-foot facility in Providence Bay. Slated to be complete this fall, the abattoir will process cattle, hogs, lamb, bison and venison.

Over the last 16 years, beef production on Manitoulin Island has dwindled dramatically, thanks to a tangle of prohibitive food safety regulations and expensive off-Island shipping costs.

That will change this fall when the Manitoulin Island Community Abattoir (MICA) opens its doors, providing farmers with a viable processing option and consumers with a steady supply of Manitoulin-bred beef.

Situated on a 10-acre lot in Providence Bay, the abattoir is slated to open this fall, after five years of extraordinary efforts by the local farming community to bring it to fruition. At 4,200 square feet, the abattoir will have the capacity to process cattle, hogs, lamb, bison and venison.

“We’ll be about 15 head per kill day and, depending on how much demand there is, we can do two, possibly three, kill days per week if we need to,” said Birgit Martin, MICA chair and a Gore Bay-area farmer.

Animals entering the abattoir are collected in a barn area, after which they are moved to the kill room for slaughtering. From there, they are brought into the first cooler to lower their temperatures, and then transferred to a holding cooler before being loaded onto trucks for shipment. The facility is also equipped with a small office, lunchroom and washroom facilities.

Offal and blood will be composted in one bin, while animals’ brains and spinal fluid—the parts of the animal connected to the transmission of bovine spongiform encephalopathy (BSE)—will be composted in a separate bin, and all compost will remain on the property.

The building itself is worth more than $1.3 million, but much more capital has gone into land purchase, legal costs, and feasibility and business plans. Capital contributors include the Northern Ontario Heritage Fund Corp., FedNor and the Rural Economic Development program, as well as 50 Island farmers, most of the Island’s municipalities and the Wikwemikong Unceded Indian Reserve.

There has also been a significant social investment, said Joan Brady. Hired as the abattoir’s manager, Brady and her husband, David, will also manage Papa’s Meats, a nearby retail outlet that’s been purchased by MICA to sell the product.

“Just the volunteer hours that the board has put in, and the farmers as well,” Brady said. “You can never put a price on that, but it’s considerable.”

The Island last had an abattoir in 1996, and since then farmers have struggled to maintain production. A serious blow came in 2004 with the Haines Report, a provincial examination into food production that resulted in strict limitations for independent producers. Small butcher shops are no longer permitted to sell any uninspected meat, and are even prevented from cutting and wrapping farmers’ own product.

But the eat-local food movement is strong on Manitoulin, amongst locals and especially tourists during the summer months, and it’s a market farmers are eager to tap into. There are about 7,000 head of cattle on Manitoulin and currently no hog production, but Brady is confident the launch of the abattoir will mean a spike in diversity.

“There’s a great deal of interest in Manitoulin lamb, so we might see more stable lamb production,” she said. “Then, if we can feed the local market with local pork, there might be opportunities there as well.”

A marketing plan for Manitoulin meat products is still in the works, but a brand has been developed: ‘Pure Island, Pure Taste’ plays on the perception of the Island as a source of high-quality, flavourful, homegrown products. B.C.-based Blue Goose Cattle Company is such a believer, it has been buying up tracts of Island farmland to cultivate beef for high-end consumers, and will use the abattoir to harvest its animals.

Eventually, Martin and Brady said, they want to have a full loop of production, from cultivation, through to processing and on to retailing and wholesaling, but they aren’t quite there yet. They’ll begin by servicing the local market first, and then branch out to other regions as the market demands.

As Martin put it, “We need to walk before we run.”

Disgraced engineer found not guilty in relation to Elliot Lake mall collapse
Jun 1, 2017 2:55 PM
Comments
We welcome your feedback and encourage you to share your thoughts. We ask that you be respectful of others and their points of view, refrain from personal attacks and stay on topic. To learn about our commenting policies and how we moderate, please read our Community Guidelines.