Starlink offers promise of connectivity for the North 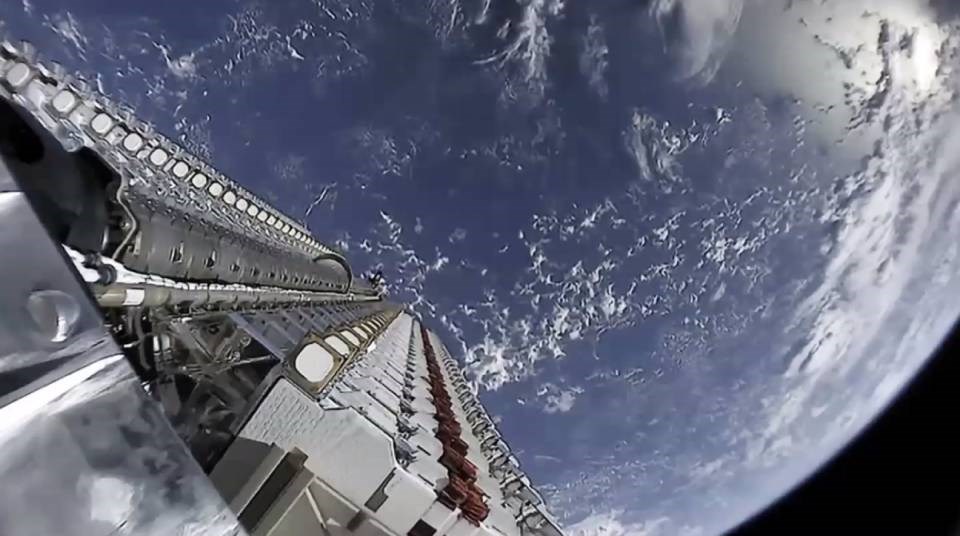 A Falcon 9 rocket owned by Starlink is pictured as it readies to deploy 60 satellites into orbit.Supplied photo

Starlink believes its satellite internet system is so simple and easy to operate, even the least technologically minded user can have it up and running within mere minutes.

“We set it up for what we call ‘instant gratification,’” said Jonathan Hofeller, vice-president of Starlink and commercial sales, from his base in Los Angeles, Calif. during an online presentation on May 18.

“So, the box arrives on your doorstep, you can put it out on your lawn, plug it in, and you have internet. It's, literally, a five-minute process.”

Delegates represented communities from across Northern Ontario whose residents have, for years, contended with slow, unreliable internet service – if they even get access at all.

According to a report released by Blue Sky Net last year, northern internet users experience average download speeds of just below 9 megabits per second (Mbps) and upload speeds of  just above 5 Mbps.

But the modern-day user typically requires minimum download speeds of 50 Mbps and minimum upload speeds of 10 Mbps to participate in activities related to business, education, telemedicine, communication, and more.

Last fall, FONOM called on the Canadian Radio-television and Telecommunications Commission (CRTC) to provide approval so Starlink could expand its Canadian operations.

“We know today our citizens require greater connectivity than 50/10 megabits per second,” Danny Whalen, FONOM’s president, said at the time.

“FONOM believes that the Starlink program is our best option.”

The company, which was established in 2015, aims to offer high-bandwidth, low-latency internet service to anyone, anywhere in the world.

To date, it's launched more than 1,500 satellites into space, and 60 new satellites are deployed every two to three weeks, Hofeller noted.

Among the countries that currently have service are Canada, the U.S., Germany, the U.K., Australia and New Zealand, and more are scheduled to go online in the coming months.

Now that it's completed the rollout of its base system, Starlink is turning its attention to high latitudes in polar regions, he said, which will benefit Northern Ontarians in rural and remote areas who aren't getting great service now.

“In the last year, the access to quality internet decides whether kids can learn or not learn, whether businesses can thrive or not thrive, and it's become a necessary pillar of our lives,” Hofeller said.

A Starlink system consists of a satellite dish – “the size of a large pizza,” Hofeller said – a power-over-ethernet cable, and a modem, all of which just needs to be plugged into a power source to get the user started.

As long as the satellite has a clear view of the sky, it can self-orient and start providing service. The antenna even comes equipped with an internal heater to melt accumulated snow and ice that could interfere with operation.

But it isn't cheap.

Hofeller said that's not even the true, full cost.

“Right now, the cost of equipment is a lot more than what we're selling it for; we're taking it at a loss,” he said. “But we're working hard to bring the cost down.”

Watch below as Pikangikum First Nation becomes the first community in Canada to hook up to Starlink. (FSET video)

Still, those in the North who have already signed on tout its benefits.

In early December, Pikangikum First Nation, a remote, fly-in community of 3,000 people situated more than 500 kilometres north of Thunder Bay, became the first Canadian community to get the service.

With assistance from FSET, a Kenora-based information technology and services company, Pikangikum's offices and institutions were all connected, achieving upwards of 130 Mbps – a vast improvement from the 3 Mbps they previously had.

“I'm a community person who really believes in their community, and I hope it gives the younger generations a little bit of hope,” Vernon Kejik, who works in victims services with the Pikangikum Health Authority, said in a video testimonial about the experience. “We're creating pathways for the younger people.”

Though Starlink in Canada is technically considered to be in its beta testing phase, Hofeller said some customers are getting “incredible” speeds: 50 to 150 Mbps, and even up to 300 and 400 Mbps in some areas, rates he called “unprecedented” for some regions.

The service is currently only available to individual residential customers, but Hofeller said the company plans to launch a service for businesses shortly.

As more satellites go into orbit, and more service areas are activated, Hofeller said there will be plenty of opportunity for northerners to secure their own piece of the sky.

"What we're really focused on," Hofeller said, "is having an incredible service for the customers – especially outside of metropolitan areas, in northern Canada and even the middle – who don't have a lot of options for great internet."