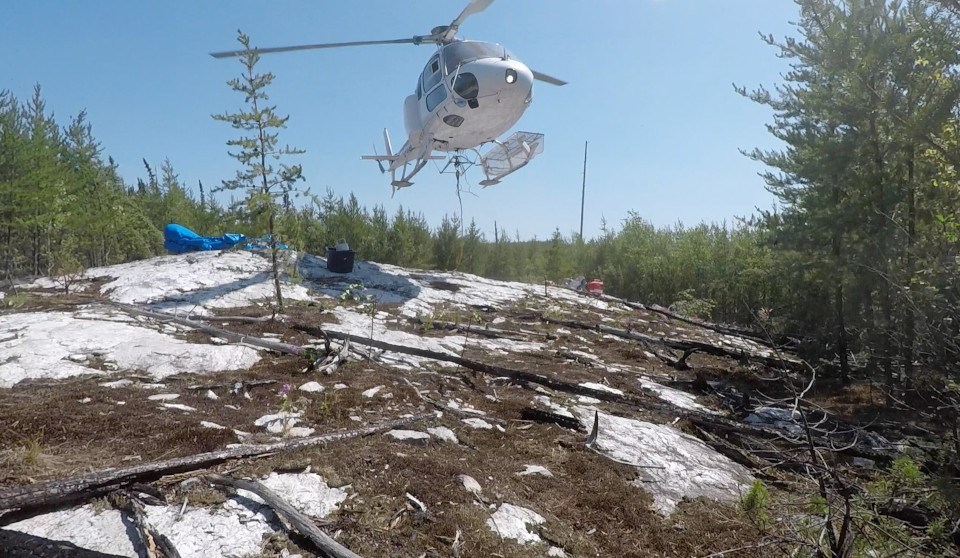 An emerging lithium producer is considering a chemical processing plant at a "Great Lakes port" as part of a US$685-million plan to bring an open-pit mine project into production in northwestern Ontario.

The company has an ambitious goal of becoming a vertically integrated supplier of battery-grade lithium hydroxide to the North American electric vehicle market with a mining and milling operation and a downstream, value-added, processing plant.

On a site located 175 kilometres north of Red Lake, Frontier's Pakeagama Lake Pegmatite (PAK) project is a 26,774-hectare property strung out in a long corridor of claims that stretch for 65 kilometres, up near the border with Manitoba.

The company has two spodumene-bearing deposits, two kilometres apart, that outcrop at surface, making them amenable to open-pit mining. Spodumene is the most widely used lithium because of its high lithium content. Pegmatite is the typical host rock for finding lithium.

Frontier officials didn't immediately respond to a query by Northern Ontario Business but according to the company's news release, their plans include studying the viability of establishing a hydrometallurgical processing plant with receiving and storage facilities at an unspecified Great Lakes port.

The company didn't name a port for the plant, nor provide any criteria for selecting a processing site.

The closest Seaway draft port to the PAK project would be Thunder Bay, where city officials there are already working with two other lithium exploration companies to find a suitable brownfield site to establish a proposed lithium processing facility.

Frontier appears to be going it alone on the processing side.

Assisting the company out on the technology front is Glencore's XPS Expert Processing Solutions, a Sudbury industrial R & D lab, which is scaling up a proprietary refining process for converting spodumene concentrate, sourced from the mine, into lithium hydroxide.

The proposed plant would produce 23,174 tonnes per year of battery-grade lithium hydroxide monohydrate at an average selling price of $13,500 per tonne. Over the mining life of those two deposits, an estimated 556,200 tonnes of refined material could be produced.

But with two other promising lithium prospects on Frontier's property, and exploration still ongoing, the resource count at PAK is likely to increase.

Frontier has not announced any off-take agreements or financing arrangements with potential customers.

Beside the electric vehicle and lithium-ion battery market, lithium is also used in the premium glass and ceramic industry.

Frontier has started a next-stage pre-feasibility study of the project, which, according to the company's "path to production" timeline, is due out sometime in 2022.

The tentative date to begin commercial-scale mine production at PAK is 2025.

"With PEA completion, Frontier will advance the Integrated Project to a PFS (pre-feasibility study) level and continue to advance the high-grade PAK Lithium Project resource toward the goal of production of premium lithium chemicals," said company president-CEO Trevor Walker in a statement.

"Underpinning the PFS will be the current drilling at the PAK Lithium Project and ongoing operations of the Company's mini-pilot plant testing our proprietary Lithium Hydroxide production process. As western automotive companies rapidly electrify their product lineups, we expect very strong demand for locally-sourced premium lithium chemicals supply, and the Great Lakes region is the prime location as it is the largest auto manufacturing hub on the continent."

Last April, Frontier Lithium received the Bernie Schnieders Award for Discovery of the Year from the Northwestern Ontario Prospectors Association for its Spark Pegmatite deposit.