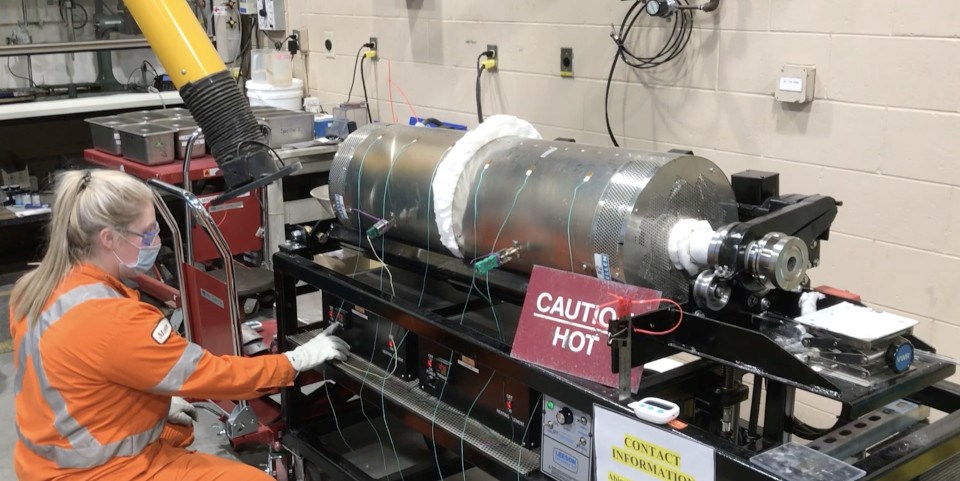 Frontier Lithium and XPS Expert Process Solutions are commissioning a mini-pilot plant with a rotary kiln for used for pyrometallurgical processing.(Frontier Lithium photo)

A Sudbury lithium exploration company is scaling up its processing plans on the path to be a supplier of battery-grade material to the North American market.

In developing a proprietary extraction process to produce lithium hydroxide chemicals, they've now graduated up to the mini-pilot plant scale.

The intent of the plant is to produce samples of lithium hydroxide to show potential customers and gather data that they'll feed into a new pre-feasibility study of their potential mine property.

Frontier has ambitious plans to be vertically integrated miner and chemical company with a downstream lithium hydroxide production facility in place.

With a 26,774-hectare land package, the company claims it has the highest grade and largest lithium resource in Ontario.

Last spring, Frontier received the Bernie Schnieders Award for Discovery of the Year from the Northwestern Ontario Prospectors Association for its Spark Pegmatite deposit.

The PAK Project contains two high-grade, large tonnage lithium deposits, known as PAK and Spark, located 2.3 kilometres from each other at the southwest corner of a property that stretches for 65 kilometres in length.

The PAK deposit contains a proven and probable mineral reserve of 5.77 million tonnes with an average grade of 2.06 lithium oxide. The Spark deposit, discovered in early 2019, contains an indicated resource of 3.25 million tonnes, grading at 1.59 per cent.

Frontier said much of the property remains unexplored and believes it has significant exploration upside.

An earlier prefeasibility study for PAK placed an 11.5-year mine life as an open pit with the potential to extend it below ground for another 4.5 years.

Company president-CEO Trevor Walker is excited by the progress made with the mini-pilot.

"Last year's preliminary test results showed the lithium extraction technology to be viable at bench-scale. The initial commissioning of the pilot represents a significant milestone and marks the culmination of extensive research and development into a flowsheet that could process spodumene concentrates directly to lithium hydroxide chemicals without employing a lithium carbonate intermediate."