THE DRIFT 2020: Moving the dial on diversity in mining 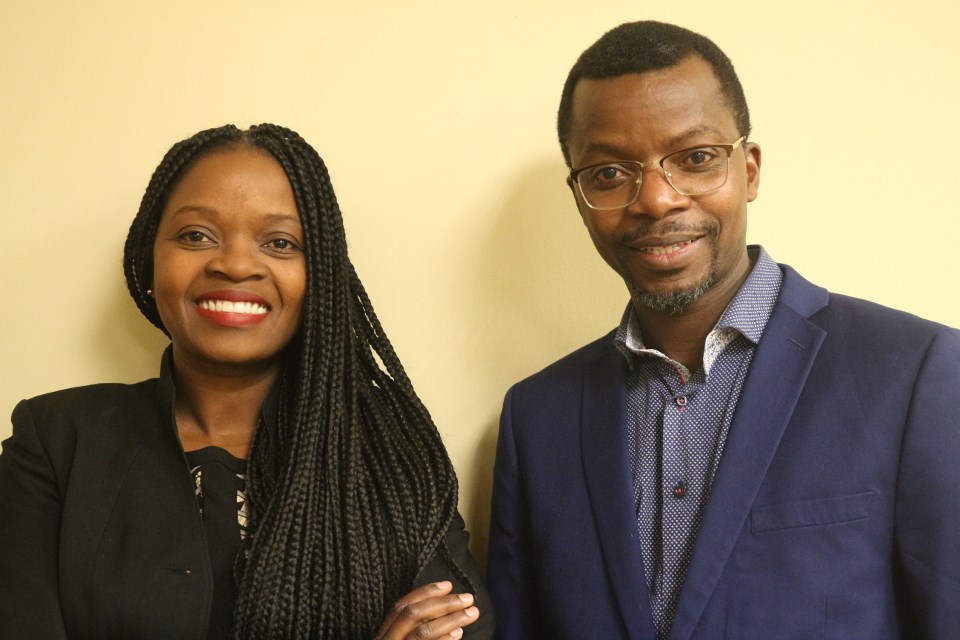 Born in Harare, Zimbabwe, Charles and Theresa Nyabeze immigrated to Canada at 17 and 12 years old after their father became established in the Sudbury medical community. (Supplied photos)

Without strong role models, neither Charles nor Theresa Nyabeze believe that they would have ended up where they are today.

The brother-sister duo, who have each become influential in the Sudbury mining industry in their own right, credits early role models with helping them find their passion in life.

Born in Harare, Zimbabwe, Charles and Theresa immigrated to Canada at 17 and 12 years old after their father became established in the Sudbury medical community.

Although they come from a family of five siblings, three of them elected to stay behind because they were at pivotal moments in their academic careers.

“In school, I really liked math, and got involved in a lot of enrichment classes,” said Theresa, who now works as a senior engineer in mine design at Vale.

“One thing that happened with me is, due to a lack of knowledge around mentorship and career exploration, I thought I wanted to be a lawyer – but that was because of Ally McBeal.”

She actually shadowed a lawyer once, but quickly realized that she wouldn’t enjoy the types of courses she’d have to take to become one.

Theresa then fast-tracked through high school and graduated a year earlier than her peers. One of her senior English teachers suggested one day that she might become a doctor, and so she ended up enrolling in biology at Laurentian University.

“Unfortunately for me, one of my really good friends, who was an older student than me, ended up being so talented in biology that I realized how opposite I was from her.”

In search of a new major that wouldn’t require taking any biology courses and would keep her local, Theresa looked around her for guidance.

Charles, her older brother, was already enrolled in mining at Laurentian, and so she was familiar with field.

However, it wasn’t until one of her professors brought in an organization called Women in Science and Engineering that Theresa considered it seriously.

“For the first time, I saw role models that I think I wanted to be like when I grew up,” she said. “That’s kind of how I hung onto the mining side.”

Charles knew he wanted to be an engineer early on. He had an older cousin who was also from Zimbabwe studying to become a civil engineer in Washington.

His original plan was to attend Laurentian University for one year so that he could transfer to a school that offered civil engineering courses. However, after the first year, he changed his mind.

“I really enjoyed the classes I took with mining engineering students and the fact that I was in a mining town,” said Charles, vice-president of business development and commercialization at the Centre for Excellence in Mining Innovation (CEMI). “And with that, I understood a little bit more about mining’s history in Sudbury.”

He saw an opportunity for himself in the industry and decided to stay.

“For me, the importance of having that role model was knowing I can,” said Charles. “I saw my cousin go on the journey. I learned what it took to achieve this goal.”

Charles and Theresa are now focused on becoming role models for the next generation.

Theresa recently published a children’s book called “Underground: My Mining Adventure,” about a little girl who goes underground for a day and discovers what the mining industry is all about.

“I’ve been fortunate to be placed around role models that really understood the need for diversity in mining,” said Theresa. “I found that it’s important that we connect with children when they are young so they can understand and visualize themselves in that industry as an option.”

Growing up in Zimbabwe imbued both Nyabeze siblings with a strong appreciation for education. To pursue degrees in the engineering discipline was very intense and required a lot of dedication and perseverance.

“How we grew up is we truly understood how precious education was and what a privilege it was,” Theresa said. “I think that foundation from Zimbabwe helped.”

Both siblings recently collaborated on the Mining Engagement Conference for Advancement (MECA), a one-day, two-evening symposium that focused on soft skill development in the industry.

The conference was Theresa’s brainchild, and she was inspired to organize the event as an alternative to conferences that are more technically focused.

“I know that soft skills are something that we all interact with either positively or negatively throughout our journeys in the mining industry, and I wanted to bring people together, to learn, to grow, and to be supportive of one another.”

Charles was also involved in the conference, and believes that working on soft skills and relationships is an important part of the industry.

“I would say the soft skills that you need to succeed in business are actually more important than the technical skills that you have. Innovation without people who can properly relate to one another is not going to go anywhere,” he said.

For Charles, it’s important to ensure that people are communicating with each other and receiving information in a way that embraces the diversity that the industry does have.

In the future, both siblings plan to continue to “move the dial” on diversity in the mining industry, and make sure that mining is a career that anyone can openly consider.

If Sudbury can take a leading role when it comes to inclusion and removing barriers to entry for people of different backgrounds, then Charles believes it will trickle out into the rest of the world.