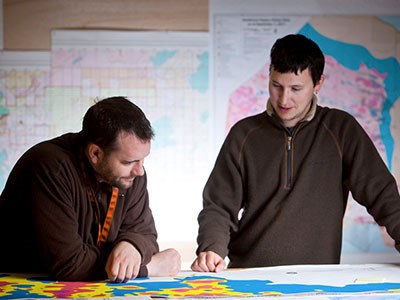 Before Martin Walter joined Treasury Metals in 2010, he didn’t think of Dryden, Ontario as a burgeoning gold camp.

Now the CEO is guiding the Toronto-based junior toward development of its high-grade Goliath gold deposit into an open-pit and underground gold mine and mill, about 20 kilometres east of town.

“There are really only three gold mining projects in Ontario that are in the environmental permitting process: Rainy River Resources, Osisko, and us.”

The 161-hectare property contains 1.7 million ounces of gold in the inferred and indicated categories.

Currently in the federal environmental assessment and provincial permitting stage, the company continues to explore for more ounces as it prepares to start a feasibility study this summer.

But on the flip side, compared to the more traditional gold camps, their property hasn't been extensively picked over and what lies beneath is much closer to surface.

“There’s a big opportunity there if you believe the rocks in the Dryden and Kenora gold belt area are prospective,” said Walter.

The project was discovered in the early 1990s by Teck Resources, which drilled off a small resource, popping holes every couple of hundred metres to probe a mineralized trend.

Work stopped when gold prices went off a cliff in the late '90s and didn’t resume until 2008 with Treasury on the scene.

The plan now is to push the deposit into the feasibility stage and hopefully bring a few hundred jobs to an area to a beaten-up forestry town that could use them.

With their federal environmental impact statement expected to be filed in October, Treasury wants to start production in the fourth quarter of 2015. An open pit and underground operation with a 2,500-tonne-per day gold extraction mill will employ between 200 and 250.

“It’s not a huge gold mine,” said Walter. “It’s going to be a neat 100,000-ounce producer that will attract a lot of jobs and a lot of opportunity for that area.”

Norm Bush, vice-president of the Goliath project, doesn’t expect labour recruitment to be a problem.

As the retired manager of the Dryden pulp mill, he endured the downsizing of that operation by 850 people in recent years.

“We know there are a lot of people working in Alberta and elsewhere that would love to come back to Dryden. Between those folks and with us being so close to town, we know that people will want to work here rather than some remote locations.”

Volatile gold prices has made it difficult to raise exploration money but Treasury has raised close to $2 million this past spring.

“I think it shows the strength of the project,” said Walter. “What the market is really doing is it’s sorting out the good projects from the bad.”

With an estimated 10- to 12-year mine life at Goliath, this year's exploration focus is infill and expansion drilling of the main deposit, to firm up and add ounces, and to track a new high-grade gold shoot to the east of its C Zone.

“We wouldn’t be in the camp if we didn’t believe it had the potential to host world-class gold mines.”

About 40 kilometres to the south, Treasury is also working on its more grassroots Goldcliff property, having performed an airborne geophysical survey that produced some targets that were drilled off this past winter. Geologists will be on the ground this summer to do more mapping, surface sampling and trenching.