Totten Mine, currently under development, is the first new mine to be built by Vale in Sudbury in four decades.
0
Dec 9, 2013 7:00 PM By: Lindsay Kelly 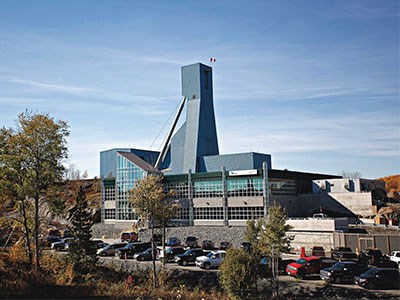 Totten Mine, the first new mine to be built by Vale in Sudbury in 40 years, has state-of-the-art technology, as well as environmentally friendly features.

Totten Mine, currently under development, is the first new mine to be built by Vale in Sudbury in four decades. It represents a $760-million investment, which brings with it jobs, subcontracts for the mining service and supply sector, and spinoffs for the community as a whole.

Located 15 km west of Sudbury in the small community of Worthington, the mine is expected to produce 2,200 tonnes of nickel per day, with a lifespan of 20 years. Roughly 600 people and six contractors—Cementation, SCR Mining and Tunnelling, Redpath, Technica Mining, Swick, and T. Bell Transport—are working to bring the mine online by early 2014. Once operational, the mine is expected to employ 150 people.

Situated along the Worthington Offset, rich with copper, nickel and precious metals, the mine is comprised of a blend of lower grade material with bands of high-grade material throughout, said Lance Howland, Totten’s chief mine geologist.

Because of the similarities between the two properties, Vale modelled Totten after its Copper Cliff South Mine, Howland said.

“A lot of the assumptions that were made in pre-feasibility for this mine, when they were trying to develop the economic picture for it, were based off of what they understood from the south mine,” Howland said.

“They expected a similar type of ore.”

Vale has focused on defining orebody in preparation for first production throughout 2013, although additional exploration is set for 2014. Drilling and geophysics data show potential to expand the mine vertically and horizontally.

Environmental stewardship has been key in the construction of the mine, which takes up a small footprint and uses existing infrastructure where possible.

“It’s nice, environmentally, to have that contained footprint so we’re minimizing our impact on the environment,” said Allison Merla, a senior environmental specialist with Vale. “Also, the design of the mine looked forward to how we would close it out, so having facilities and operations contained in small areas helps the closure planning process.”

Material-handling areas are all enclosed, and a sophisticated water treatment system ensures water usage is kept to a minimum, recycled when possible and reduces metal content before its return into the environment.

Merla said building a brand-new mine has given the company the opportunity to do it right the first time, instead of adapting decades-old infrastructure.

“If you’re looking at a legacy site that has always done something a certain way for years and they’re working on some of the older permits, or legislative requirements, it takes a while to install that change,” Merla said.

The environment was first and foremost with residents of Sagamok First Nation, on whose traditional territory the mine is located.

The community has negotiated an impact and benefit agreement (IBA) with Vale, affording the community opportunities for jobs, training, education and programs dedicated to culture and language retention.

“I’m encouraged at how both Sagamok and Vale are working together to implement the agreement in a timely way,” Eshkakogan said.

Sagamok has secured the contract to haul ore from Totten to the Clarabelle Mill in Copper Cliff and is working with project partners on a new miner training program, which provides Sagamok residents with an introduction to underground mining through classroom and on-the-job training.

“I have to say, all of the mining companies in Sudbury—I never have to twist anybody’s arm to come here and talk about their company and what they need as far as the workforce,” Eshkakogan said. “They were very enthused about helping us out and I think we’re starting to see the benefits of that now.”

Sagamok is continuing to discuss with Vale how the community can be involved at the decision- making level in environmental monitoring of the site.

To date, Totten has shaped up to be a safe mine. In October, workers reached a laudable milestone: one million hours of lost-time accident-free. That equates to 16,000 feet of development without so much as a first aid call, said project manager Bob Booth.

The “Team Totten” approach encourages everyone to follow the SafeProduction model of risk-based on-the-job assessment before undertaking any task.

“Team Totten is about one team, one way to zero harm, because we’re dealing with six different contractors here to produce a very complexly driven mine,” Booth said. “We deal with some very serious issues, but we try to do it in such a way that we engage everybody, and that’s the piece that’s hard when something’s complex.”