SGX Resources, which started as a subsidiary of San Gold Corporation, set its sights on the Timmins gold camp for a variety of reasons.
0
Oct 25, 2013 2:09 PM By: Liz Cowan 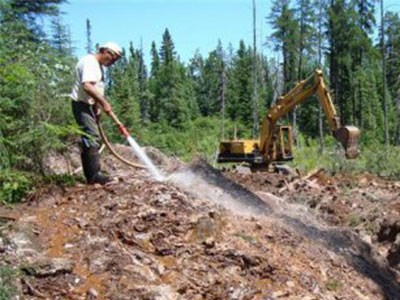 SGX Resources, which started as a subsidiary of San Gold Corporation, set its sights on the Timmins gold camp for a variety of reasons.

“We targeted Timmins because it is one of the few remaining greenstone belts in North America, and even the world, that is really fractured in terms of ownership, has good access and good production history,” said Dale Ginn, president and CEO.

Other areas, such as Red Lake and parts of Manitoba, the ownership has been consolidated, so there is only a few players in each belt.

“We see value in the Timmins area,” he said.

The targeted properties are situated on the major productive fault systems and extensions.

The Timmins North property, which contains the Tully deposit, about 20 kilometres north of Timmins, is to be the company’s flagship property. It has a known length of more than 600 metres and remains open in all directions. About 30,000 metres of drilling have been completed by the company to date.

The Timmins South property, about 60 kilometres south of Timmins, includes the Edleston Zone, which has been extended to more than 400 metres long along strike to a depth of more than 200 metres. Since the fall of 2011, SGX has undertaken an extensive drilling program there, as a follow-up to geophysical targets, with an objective of locating near-surface gold deposits.

“What we did was extend to the west and we have some favourable structures. The area is covered in gravel and there hasn’t been much prospecting for gold, just due to the overburden,” he said.

In the heart of Timmins, the company acquired a minority interest in the Davidson-Tisdale deposit, with Lexam VG, which is an advanced high-grade gold deposit.

“It requires some time and attention,” Ginn said.

Plans for this year include continuing to drill the Tully deposit in terms of definition and extending it along strike and to depth.

“We are preparing to do our first resource calculation on that deposit as well as the Edleston later this summer,” he said. “We will continue with exploration, definition drilling and resource and preliminary economic work on both those deposits.”

The Edleston discovery, he said, was “exciting” and the stock moved dramatically, with a lot of trading.

“The Tully hasn’t been well known and has taken a back seat to that. However, now that Tully is moving to the forefront because of its high grades and its proximity to surface, we find ourselves in a market that is very negative towards the junior gold space now. It is tough, but those in the know – those that have been working in the industry through its ups and downs – are excited about both of these projects,” Ginn said.

The Tully deposit would be the first to advance to a development stage, because it would only require a decline access.

“It’s a low capital cost project, and high grades, right off the bat,” he said. “We would have a few different milling options, and it might not be necessary perhaps to build our own mill. It would potentially be a very low cost operation to run.”

The Edleston property would be a larger-scale, higher-capital project, and may have to be developed in conjunction with some of the surrounding projects.

“Both sites have great access, year-round road access, and close to Timmins,” Ginn said. “And they are in a spot that is not a stranger to mining.”

SGX expects to spend about $6 million to $7 million on further exploration of the properties this year.

“It is success driven and market and cash driven. We will probably complete that much work, but we could do more in better markets,” he said.

The same approach that was taken with Tully will be taken for the Davidson-Tisdale deposit, which is gathering up all the work done on it for last 20 years, and reinterpreting the data to get a handle on what are the controlling factors there.

“I think the Timmins area is a great one to be in,” Ginn said. “The history of production allows people to have faith, and if you find something, it may be of size. It continues to produce and there is no sign of that letting up.”