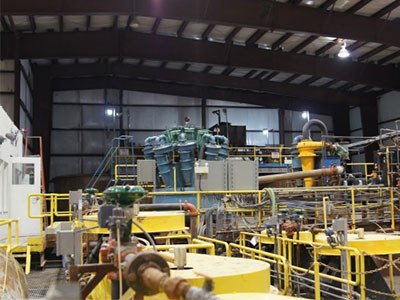 With the price of construction associated with a new mill costing upwards of $50 to $70 million, paying for custom milling can offer big savings, said David Rigg, Northern Sun’s president and CEO, who estimated companies going this route could save 40 to 50 per cent of capital cost of a project.

“What it does is it allows smaller projects to proceed, which means more jobs for the Timmins area, and it gives an opportunity for mining companies that have a small resource to actually go and mine it,” he said.

Northern Sun currently has a contract in place with Wallbridge Mining to mill ore from its copper-nickel-PGM Broken Hammer deposit in Sudbury. Milling is expected to start at the end of June and will last over a 12-month period.

“They’re shipping ore all the way from Sudbury up to our mill where we can get much better platinum, palladium, PGM and gold recoveries than they can get down in Sudbury, and it actually pays for the shipping distances,” Rigg said.

The company is actively seeking interest from other companies that need milling services.

Using profits from the Redstone Mill will then support Northern Sun’s exploration projects. The company is currently working on the acquisition of Snow Lake mine in Manitoba, located an eight-hour drive from Winnipeg. Rigg said the company is hoping Snow Lake will become Northern Sun’s first true gold operation.

The mine, which operated for a period in the 1950s and 1960s and again in the late 1990s, has produced 1.4 million ounces to date and there are currently 1 million ounces on the property. Rigg said it should take the company about 18 months to ramp up to full production.

Northern Sun also retains the Hart and Redstone nickel mines in Timmins, although Rigg said the company is holding off on mining them further until the price of nickel increases.

“In the Timmins camp, we want to use that mill for the central base of support of our operations, and we’ll be doing exploration and acquisition in the Timmins area and looking for joint ventures,” Rigg said.

Based on its production history alone, Timmins is a strategic area in which to locate a custom mill, he said. The largest camp in the Abitibi area, Timmins has produced more than 62 million ounces of gold and is also home to Kidd Creek, the area’s largest base metal producer, he noted.

With the proliferation of so many types of deposits in the area, Rigg said there are plenty of opportunities for producers. He encourages companies to contact Northern Sun to discuss their needs and the options available to them, including ordering bulk samples.

Recommended run time for the mill is 10 days, which helps provide a more accurate idea of what’s in the bulk sample, and a solid estimate of potential commissions, Rigg said.

Operation of the mill will also give Northern Sun an opportunity to create more employment for Timmins residents. Rigg estimates the company will need to hire 35 people to staff the mill once it’s up and running.

“I think we’re in good shape,” Rigg said. “We’re starting up again, we’re hiring the crews, I think we’ve got a very good team right now, and things are moving ahead very nicely for the end-of-June startup.”