New development opportunities on the horizon for airport

Sioux Lookout Airport staff and municipal officials are actively engaged in laying the groundwork for a new and improved facility to meet potential development opportunities on the horizon.
0
Oct 24, 2013 6:05 PM By: Northern Ontario Business Staff 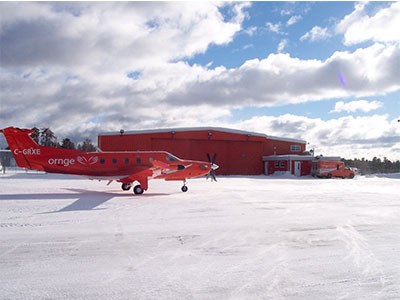 Sioux Lookout Airport staff and municipal officials are actively engaged in laying the groundwork for a new and improved facility to meet potential development opportunities on the horizon.

Sioux Lookout Airport staff and municipal officials are actively engaged in laying the groundwork for a new and improved facility to meet potential development opportunities on the horizon.

Armed with a re-launched website and marketing brochure the Sioux Lookout Municipal Airport is focusing on the business planning, development and marketing of the airport and its adjacent lands.

Sioux Lookout is located halfway between Winnipeg and Thunder Bay. Known as the Hub of the North, the community of 5,500 is a regional service centre and the jumping-off point servicing a surrounding area of 30,000.

“Our First Nations neighbours are very active in the business world and in partnership development,” said the airport's manager Ben Hancharuk. “They're continuing to grow their communities.”

As such, the airport is consistently one of Canada's busiest with more than 30,000 aircraft movements in 2011, and an annual passenger movement of more than 119,000 passengers.

The expansion of medical services, mainly from the 2010 opening of the new Meno-Ya- Win Health Centre, growing mineral exploration and business travel are expected to boost the 2012 numbers past 123,000 passengers.

The airport is also a major employer with more than 100 people working for both the public and private sectors.

The airport has a subdivision plan for 44,520 square metres (479,000 sq ft) of fully-serviced, and flexible lot space with both airside and groundside access. Although Sioux Lookout is west of the burgeoning Ring of Fire projects, the potential to assist in their development exists along with a growing number of area mineral explorations that are closing in on becoming operating mines. If that opportunity arises, municipal officials want to be poised to offer the airport's extensive acreage for potential expansion of maintenance such as paint and avionics repair, cargo and warehousing support for Northern communities, an e-commerce centre providing dry goods and food parcels to the north as well as a potential distribution centre for catalogue shopping or web ordering for the North.

“The lake is a huge asset for float plane access to the maintenance facilities we have at the airport such as Allen Airways, Northern Airborne and Red Hawk Aviation,” said Hancharuk.

That property offers “endless possibilities” such as a hotel and conference centre, retail, manufacturing and freight warehousing.

“Passenger terminal renovation and expansion is a priority,” said Hancharuk, with more lounge, retail and ticket counter space needed. Preliminary design and Class “C” costing to refurbish and double the size of the existing 1,000-square-metre (10,760 sq ft) building are expected this year thus giving municipal officials and management the foot hold to establish the financial plan and timelines for construction start.

“We need to house our current tenants better through renovation improvements. We need to improve, and make more efficient, the flow of traffic through the terminal with a proper baggage area for airline operators and provide more opportunity for concession space which is limited right now.”

“We are committed to continuous improvement and are nearing our goal of ensuring the airport is ready to support and house any type of development that may arise throughout the region.”

Pure Gold Mining's topped up and ready to go drilling
0