Laurentian University's president has brought 'a buzz' to the institution

Dominic Giroux never aspired to be the president of Laurentian University, or any university, for that matter. But nearly five years into his tenure as president, many of his colleagues could not imagine him doing anything else.
0
Feb 5, 2014 4:02 PM By: Jonathan Migneault 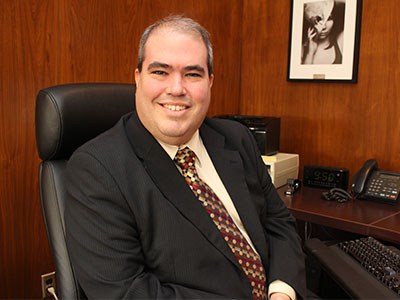 After nearly five years at the helm of Laurentian University Dominic Giroux says he'll be happy if people say he delivered on what he said he would do, after his second term ends in 2019.

Dominic Giroux never aspired to be the president of Laurentian University, or any university, for that matter.

But nearly five years into his tenure as president, many of his colleagues could not imagine him doing anything else.

“You know how people want to be around things that are really buzzing? Dominic brings that buzz to the institution,” said Carol McAuley, Laurentian's vice-president of administration.

The board's decision to hire him for the top spot was a departure from the direction other Canadian universities had taken.

Giroux does not have a PhD, and in 2009 he was 34 – he is 38 today – which made him the youngest university president in Canada.

Before his appointment to Laurentian he was assistant deputy minister with the Ontario Ministry of Education and the Ministry of Training, Colleges and Universities.

His career in the education sector spans back to when he was 19, and was elected as a trustee with Ottawa's French Catholic School Board. Two years later he became the board chair.

When he started at Laurentian, Giroux found out he had more pressing concerns to address than his age and level of education.

“When I accepted the appointment I didn't know the university had a deficit,” Giroux told Northern Ontario Business.

In fact, Laurentian's deficit, nearing $5 million, was the highest for an Ontario university, proportional to revenue, in 2009.

Giroux said addressing the deficit was the biggest challenge he has faced as Laurentian's president.

Under his leadership Laurentian managed to pay off that deficit, and is on track to pay back an accumulated $11-million deficit.

The university also managed to reverse the trend of declining student enrolment. The volume of applications from prospective new students to Laurentian has increased at twice the average pace in the sector.

The average entry grade for new students at Laurentian increased from 79 per cent before Giroux's tenure to 81 per cent.

Another challenge Giroux faced was to come up with a focused strategic plan for the university. “Managing to articulate a clear vision for the future, which inspires people, is quite difficult,” he said. When he started in 2009 the university had a 16-page strategic plan with 132 priorities.

Giroux asked the board to come up with a more focused strategy. To achieve that goal they hosted 50 sessions on campus to consult with faculty, students and staff.

In December 2011 the board unanimously approved a five-page strategic plan, for 2012 to 2017, that covered five key areas: student engagement and satisfaction, national recognition, university of choice, community responsiveness, and organizational excellence.

Giroux's tenure as president has also seen Laurentian expand into new areas of education and research. Most notably, the university's new downtown School of Architecture launched in September 2012. “From my perspective it was a no-brainer,” Giroux said about the new school. “I saw this as another means for the university to differentiate itself.”

It was the first architecture school built in Canada in 40 years and only the second outside of a larger metropolitan city.
The school's proponents have touted its potential to revitalize Sudbury's downtown core with an influx of students, faculty and staff to participate in the local economy.

Laurentian also launched the Goodman School of Mines under Giroux's leadership. Giroux met with the Ontario Mining Association board and his team consulted with 100 leaders from the mining industry to see what they needed from a new mining school.

In fact, Laurentian has won the Canadian Mining Games more than any other university.

But there was still a void that needed to be filled with regards to First Nations relations in mining, mining financeand several other niche aspects of theindustry.

The Goodman School of Mines looked for existing courses to fill those voids, and create a robust mining program.

After receiving input from the mining sector, the school also implemented a number of professional development programs to allow companies to increase the skills of their senior people. The mining MBA will be part of the School of Mines' slate of executive programs. The programs — and there are at least 12 in development – give mining companies the chance to enhance the skills of their workforce.

Other executive programs in development include mineral exploration and mine finance, mining project management, leadership in mining environments and resource evaluation.

“By 2019, if people say we delivered well on what we said we would do, and we did well and with creativity, I'll be happy,” Giroux said.

Giroux told Northern Ontario Business he does not yet know what he will do after 2019, but added he has ruled politics out of the picture.

“My wife and I don't have a wedding contract, but we joke that if we had one it would say I will never run in politics again,” he said. “I was a school board trustee at age 19, and really enjoyed it.”