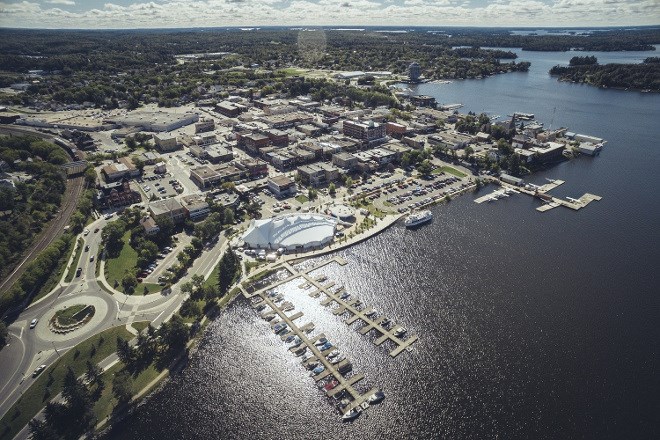 The City of Kenora is located in the heart of the continent, on the Canadian Shield, in the northwest corner of Ontario. It is just 50 kilometres from the Manitoba border, two hours from Winnipeg and right on the Trans-Canada Highway. It is perched on the north shore of Lake of the Woods and its 14,522 islands and 65,000 miles of shoreline. It is that iconic image of Canada painted by the Group of Seven – the granite, the pines, and the water.

Kenora has a population of 15,100 with a service area of approximately 25,000. In the summer months, it is cottage country for Manitoba, and the U.S. Midwestern states, which doubles the population as visitors are drawn to this water-based playground.

Recently rebranded as “North America’s Premier Boating Destination,” the City of Kenora has emphasized expanding the tourism industry. Since 2006, almost $30 million in public sector investment has been made in major capital projects to build Kenora’s tourism infrastructure, along with $61 million in private sector investment between 2007 and 2012. Major projects undertaken during this period include:

Also, the Kenora Airport Authority announced the grand opening of the new passenger terminal on Sept. 29. The project provided a much-needed replacement for the old terminal built in 1967 and had a final price tag of $6.2 million. The new terminal features a unique Kenora-esque look to it with timber framing, high ceilings and natural light in the main lobby. The project also included a realignment of the apron to improve access to the terminal and accommodate larger aircraft. The Kenora Airport Authority is currently working on proposals to bring in more airlines to the revitalized airport.

Kenora is looking ahead to the future with a number of new capital and planning projects underway.

The Lake of the Woods Museum is currently working on the Big Picture campaign, which will the see construction of a new Art Centre valued at $4.5 million. The project is driven by the generous donation of Water J. Phillips woodcut prints, watercolours and engravings by Bryce and Nicki Douglas, two long-time lake residents. The 65-piece collection is valued at approximately $1.5 million. Construction of the new centre began in 2018 and completion is expected in the spring of 2019.

Secondly, the City of Kenora is proposing to undertake the fourth phase of its Downtown Revitalization project in 2019. This phase will focus on the First Street South and Chipman Street areas and will include underground infrastructure upgrades, streetscaping and a proposed street realignment. Previous phases of the Downtown Revitalization have created 513 jobs in the Harbourtown Centre.

The City is also in the process of completing a business development plan for the Harbourfront area. This work is intended to align with previous infrastructure improvements and creates a new vision for this significant feature of the community that attracts both residents and tourists.

Along with millions in public and private sector investment in tourism infrastructure, the City of Kenora has established three Community Improvement Plans (CIPs) that aim to spur growth and economic diversification. The City has recently undertaken expansion to its three CIPs, which provide grants and incentives for development in particular project areas throughout the municipality including the Harbourtown Centre, former mill site and neighbourhood of Keewatin. A variety of assistance is available through these programs including, but not limited to, grants for housing development, façade improvement, landscaping, incremental taxation, accessibility and permit fees. Between 2007 and 2017, $691,692 in public sector funds has leveraged over $1.6 million in private investment.