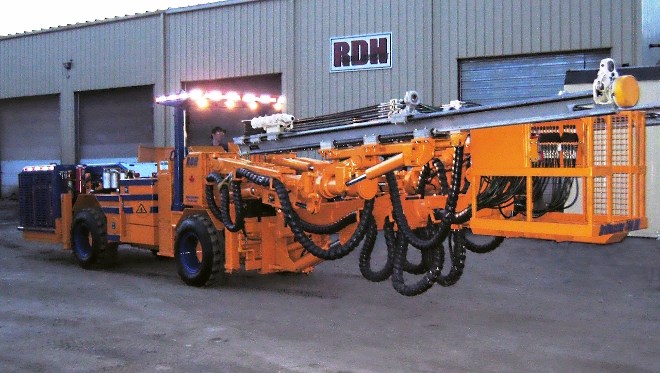 Expect a physical and workforce expansion in the near future, said Sudbury supplier RDH Mining Equipment following their merger with SMT Scharf of Germany.

RDH Mining Equipment has joined a larger family, which its management says will mean more opportunities to grow as a company and more markets to expand into.

The mining equipment producer announced in a news release Feb. 7 it was acquired by German-based company SMT Scharf for $8 million.

“We were approached by Scharf and they said they were interested in making a deal,” said Neil Edward, chief financial officer for RDH Mining Equipment. “We had visited them in Germany to continue discussions back in October to discuss our two businesses.”

The company is located in Alban, about an hour southeast of Sudbury and supplies mines with mobile equipment.

He explained the two companies had agreed some time ago they would be a good fit together. They had a few parts of negotiations regarding legal aspects drag out longer than anticipated, but the deal turned out well.
“What we want in their vision is for RDH to be a centre of excellence in rubber-wheeled mining equipment for the SMT Scharf group,” he said.

He explained they were the pioneers in hard rock battery equipment since 2011 and their first units went to Kirkland Lake Gold. It was something Scharf was very excited about, especially with the demand in battery equipment increasing exponentially.
Now with so many other companies offering battery equipment, Edward said it's more competitive. With the acquisition, they are being backed by a larger corporation. Edward explained SMT has a workforce of 330. With the 50 at RDH, that gives them a total of 380.

"Now we can compete at the next level,” he said.

He added they have been telling customers the company is part of a group of companies. But now they can take advantage of a lot of the business opportunities Scharf is involved in internationally.

“This will help us develop new markets and improve distribution opportunities in other areas in the world, such as South Africa, African south Saharan region, South America, Europe, Russia and China,” he said.

The merger is good news all around for the company, as it gives them room to grow their company physically. He said this will allow them to expand their physical space, number of pieces of equipment and staff.
“Recruitment of staff is very likely. We want to get more jobs in the north,” he said.

This is the latest in a recent spike in partnerships and mergers local mining supply companies are experiencing with larger corporations. Edward said he's noticed, and with his company, it was considered a global company, but Canadian-owned. They will also be helping SMT Scharf to introduce their products to the Canadian market.
“They had been working on projects in Germany that they can now easily support at the facility here,” he said.