Some management changes are in store for the Earlton-Timiskaming Regional Airport. The assets of the small rural airport are being transferred from a joint municipal services board to an airport authority in 2017.
Aug 24, 2016 2:41 PM By: Ian Ross 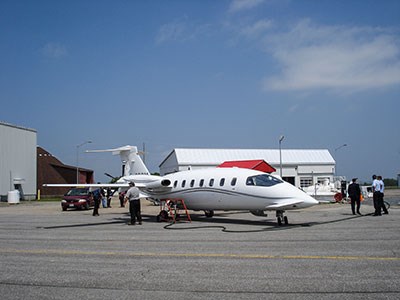 Corporate charter and recreational aircraft make up the bulk of the traffic at the Earlton-Timiskaming Regional Airport.

Some management changes are in store for the Earlton-Timiskaming Regional Airport.

The assets of the small rural airport are being transferred from a joint municipal services board to an airport authority in 2017.

The articles of incorporation and a purchase agreement of $1 for the transfer are being drafted and 14 area municipalities — including Temiskaming Shores — are expected to sign on over the next three months.

“Realistically, we’ll be signed over by year’s end to operate for 2017 as a phase-in year,” said Kidd. “We can develop a five-year capital plan and make sure everyone is comfortable (with the arrangement).”

The transfer does not require Transport Canada approval.

The airport is owned and operated by the Township of Armstrong, based in Earlton, but the current governance structure has had its shortcomings.

Area municipalities had been contributing on an annual per capita basis, Kidd said. While Temiskaming Shores alone was contributing $80,000 a year to cover operating expenses, “there was nothing toward capital improvements.”

Kidd said the airport needs $700,000 to $800,000 in capital upgrades to seal cracks in the 6,000-foot main runway, rehabilitate a gravel crosswind runway, and replace or upgrade equipment.

Clearly the airport had become too much of a financial burden for Armstrong, said Kidd, in “putting aside their own infrastructure to improve the airport.”

Establishing an airport authority will allow them to tap into government funding agencies. After three years, the authority would be eligible for the federal Airports Capital Assistance Program.

The authority will be a not-for-profit corporation led by a board of directors with political representation and a seven-member executive committee of airport users and experienced aviation people.

The airport’s history dates back to the late 1930s when it was established as an emergency airfield by Trans-Canada Airway. The main runway was lengthened to 6,000 feet to accommodate fighter aircraft from the Air Defense Command in the 1950s.

Canadian Pacific and Trans-Canada Airlines made scheduled stops in Earlton on their way to Toronto and Montreal until 1973 when provincially owned NorOntair took over until 1996.

Bringing back scheduled service always remains on the table, Kidd said, but discussions with aviation companies haven’t yielded anything positive.

Area businesses wouldn’t be able to guarantee daily ridership numbers and the air fares would be too exorbitant to sustain a local service.

Kidd said Porter Airlines was once approached to see if they would divert to Earlton on their daily Toronto-North Bay-Timmins run, but that idea was rejected because of the increased flight time to accommodate only a handful of passengers.

He’s optimistic that Moosonee-based Wabusk Air may offer a travelling option at some point.

“We’re hopeful with Wabusk Air purchasing the main hangar and operating a charter, freight and repair service that they may do the flight service between here and Timmins as well.”

Gogama's Côté mine project has more gold to give
0