A step inside the Temagami Canoe Company's original workshop is like greeting a long forgotten friend.
Aug 8, 2011 8:16 PM By: Liz Cowan 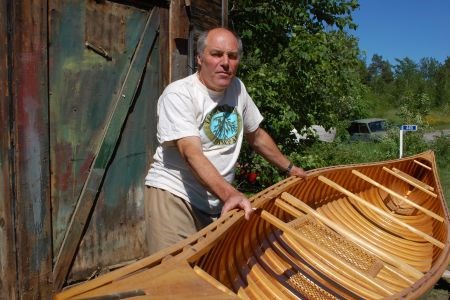 A step inside the Temagami Canoe Company's original workshop is like greeting a long forgotten friend. There is something vaguely familiar about the dark interior, the smell of old wood, the creaking floor boards and a variety of undisturbed, curious items.

The building is more than 80 years old, but for owner John Kilbridge, it's synonymous with the hand-made wood canvas canoes he creates and the dilapidated, worn-out ones he lovingly restores on the shores of Lake Temagami.

“I suppose the building has seen better days,” he said. “But I tend to think of it more as a museum now.”

The canoe company was established in 1928 by Bill Smith and was sold to Kilbridge, and his brother Steve, in 1977. The brothers spent a winter with Smith trying to learn the craft. But it was mostly through trial and error and the school of hard knocks that the pair honed their skills. For the past 20 years, John has run the business himself since his brother relocated to southern Ontario.

Inside the building, amongst the pieces of wood, canoe shells and the odd out-of-place household item, there is a standard boiler, used to soak and steam the wood prior to bending. Bought used in 1931, the brothers continued using the boiler up until the 1980s.

“The building was constructed around the boiler,” Kilbridge said. “There's no way it could be moved. We needed to get some work done on it and it was going

to cost about $5,000 back then and we were told we would have to take a steam operator's course in Toronto for a month in order to run it. We haven't run it since.”

It would often take 24 hours to reach a boil, but in winter, it would run continuously.

“It wasn't very efficient,” he said. “But it's part of the history here.”

The brothers ran the canoe company using the traditional methods and original machinery they inherited. They cut their own trees in the area and used a table saw and planer that was powered by a single cylinder Crossley Brothers engine. The machinery is still there, but a new workshop housing modern equipment was built in 1993 next to the original shop.

Despite the “stone age” deficiencies and challenges of the dated equipment, Kilbridge has a fondness for the machines. The planer produced a slight scalloped finish on the planks, and not the smooth one attained today.

“I regarded that as a fingerprint, unique to our canoes,” Kilbridge said. “It was a signature of individuality. Yeah, perhaps the smooth finish feels better, but it was our planer that finished it that way.”

The planer also produced a different sound with different grains, producing a unique “song” as it was running.

“The new machines run well, they are efficient, and there is no dust,” he said. “But there is something to be said for the old ones.”

Kilbridge hails from Maine and discovered the Temagami area when sent to a canoe camp as a youngster.

“I hated it the first few weeks,” he said. “I couldn't stand it. But then, the last few weeks it was like being in paradise.”

It was then he became hooked on the wood canvas canoe, due to its versatility and ease of repair, and fell in love with its construction.

“Not much has changed, in hundreds of years, in building a canoe,” he said. “The external shape is still formed the same way and instead of birch bark, we use canvas.”

It takes about a month to construct a canoe, and about 2,200 tacks are used, with each struck six or seven times.

He no longer cuts trees for the canoes and canvas is no longer made in Canada. But the labour intensive methods haven't changed. The sequential process of building a canoe requires that each step has to be done right and never cutting any corners. And after more than 30 years, Kilbridge still enjoys his work, lifestyle, and sharing the company's story with a stranger.

“It's not about money,” he said. “It's very cross-disciplined and it takes years to really get down.”

Temagami Canoe Company is the oldest builder in the province and the second oldest in Canada. And if you look for its website, you won't find it.

But if you stand outside the shop and admire its weathered facade, John will appear and you'll discover an age-old craft that has stood the test of time.

There are thousand reasons to feel good in Timmins: settlement worker
0