To say it was impulse for Nicole Guertin to purchase a century-old mansion while on a brief 2003 visit to Haileybury is a gross understatement.
0
Jul 29, 2014 12:49 PM By: Lindsay Kelly 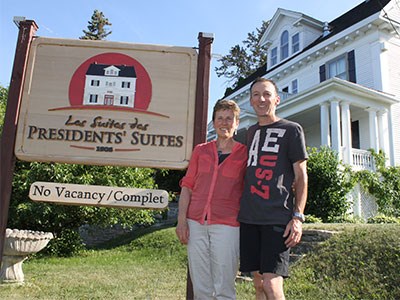 Nicole Guertin and Jocelyn Blais offer their guests an experience apart from the regular hotel room stay. At Presidents’ Suites in Haileybury, guests stay in apartment-like suites with full amenities for one- or multi-night stays.

To say it was impulse for Nicole Guertin to purchase a century-old mansion while on a brief 2003 visit to Haileybury is a gross understatement.

But Guertin, who, along with her partner, Jocelyn Blais, is the proprietor of Presidents’ Suites and Prospector’s House guest homes, was so struck by the beauty and history of Temiskaming, she followed through on her instinct.

“A lot of people in the North — Timmins, Kapuskasing — we come down and we’re always in a hurry; we never come through Haileybury, so we don’t know what’s here,” said Guertin, who hails from Kapuskasing. “It was really the first time I came here, and I was surprised how beautiful it was.”

The house isn’t like any other. The rambling mansion overlooking Lake Temiskaming along Millionaires’ Row was built in 1906 by Arthur Ferland, a mining bigwig who struck it rich during the Cobalt silver-mining boom. His wealth was reinvested into the original Timmins gold discovery and helped build the industry there.

Despite the home’s grandeur, it required a lot of work to bring it up to a high standard, and when zoning complications thwarted Guertin’s original plan for a B&B, she opted for suites instead, completely gutting the home and rebuilding it one room at a time.

The result is Presidents’ Suites, the crown jewel in a trio of historical homes owned and operated by Guertin and Blais, which offer the amenities of a hotel with the intimacy of personal apartments.

The Presidents’ Suites have four apartment-style suites, each having between one and three bedrooms, a sitting room, and access to kitchen amenities. Guests have the use of a Jacuzzi, a private beach and dock, along with kayaks, canoes, standup paddleboards, and bicycles. The suites accommodate a total of 22 people.

Around the corner, the equally historic Presidents’ Suites Guesthouse, built in 1922 by Northern Miner newspaper editor Jim McRae, is a two-bedroom home with a living room, dining room, two bathrooms, a full kitchen, and a luncheon and work area. Able to accommodate up to six people, the lake views from the porch are spectacular.

A few blocks over, Prospector’s House has 3,200 square feet of living space, incorporating private bedrooms and bathrooms with shared common space, including the kitchen, dining room, two living rooms, an exercise room and a laundry room. During weekdays, the house can accommodate up to four clients, and a conference room for 12 people is available. On weekends, when family reunions are popular, the home can fit up to 20 people.

Most recently, the couple added Farr Island to their portfolio. Named for C.C. Farr, Haileybury’s founding father, the island is in transition. For now, it serves as a daytime haven for guests canoeing across the lake, but eventually, it will be a glamping (glamourous camping) destination where patrons can stay in one of 14 prospector’s tents. Guertin and Blais recently invested in a 28-foot pontoon boat to ferry guests between the island and the mainland.

Self-proclaimed “project people,” Guertin and Blais are constantly in motion, adding defining touches and improving the experience for their guests. Guertin closely attends to patrons’ needs, frequently implementing their requests and suggestions, while Blais, an engineer by training, is handy with his hands, whether it’s framing a garden pergola so visitors can relax outside, or constructing the hand-hewn murphy beds that are strategically placed throughout the residences to increase sleeping options.

“We’re putting in a lot of time and energy, and it’s paying off,” Guertin said, noting that her service regularly receives five-star approvals on the travel-rating website TripAdvisor. “If we don’t get five (stars), we’re taking it seriously and asking what we’ve done, and clients are really there to help us.”

The suites are more than just a place to put your head down for a night. A stay at the guesthouse is infused with the history of the area, along with personal touches, like the handwritten notes Guertin leaves to welcome every new arrival, or the homemade bread delivered, fresh and warm, by Blais each morning.

At Presidents’ Suites, Guertin organizes historical dinners during which visitors dress up and play the part of mining’s prominent figures, or she might send them on an area-wide treasure hunt.

“We do teams of three or four, and everybody’s in a character and, depending on who you are, we send you to different places between Haileybury and Cobalt,” Guertin said.

A fun twist on corporate networking, Guertin said the events bring participants out of their shells and foster teambuilding, while introducing visitors to Temiskaming’s vibrant history.

The mining theme at Prospector’s House is even more pronounced, with artifacts, work by local artists, and historical photographs placed throughout the home. The idea is to whet the appetite of visitors so they’ll delve further into Temiskaming’s heritage, visiting a museum or other historical sites, and take in all the area has to offer.

For Guertin and Blais, the services they offer are inextricably linked to the local tourism industry, but Guertin believes Temiskaming is just beginning to unlock its tourism-driven potential.

“I love this community; it’s so much history and we can do anything,” she said. “(The story of Cobalt’s mining boom) is bigger than the Klondike, it’s just that we haven’t had good media relations to talk about it, so there’s a lot that can be done.”