Hotelier looks to drum up interest in mining history

A Haileybury hotelier and tourism promoter wants to revive the area’s rich mining history and introduce it to a wider audience.
Mar 25, 2014 2:49 PM By: Ian Ross 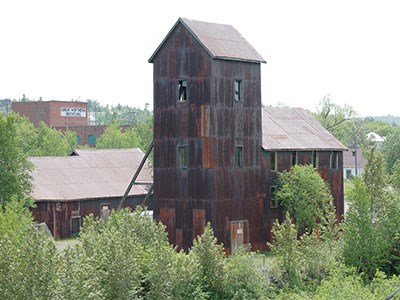 Cobalt’s iconic and historic headframes will be the backdrop for an upcoming media tour of the Temiskaming area aimed at promoting the area’s tourism assets and drawing attention to its rich mining history.

A Haileybury hotelier and tourism promoter wants to revive the area’s rich mining history and introduce it to a wider audience.

Nicole Guertin, co-owner of Presidential Suites, is hosting a media familiarization tour in early May designed to spark interest in the famed Cobalt mining camp and its impact in today’s Canadian mining industry.

While the Yukon has its lore of the Klondike, Guertin said the story of Cobalt and its place in Canadian history needs to be told.

“Being in the middle of this Abitibi-Timmins-Sudbury triangle, we haven’t really sold the area that much for mining.”

Since permanently settling in the Temiskaming area three years ago, Guertin and her partner, Jocelyn Blais, have purchased, renovated and rent out five historical homes in Haileybury.

Their most recent acquisition is a home they’ve dubbed Prospectors’ House, refurbished to highlight the history of the 1903 Silver Rush in Cobalt.

Interior decorator Renelle Laliberte of Toronto decorated the four-storey home with a rustic theme in keeping with local mining history, and it features several original works by local artists.

Haileybury is three kilometres north of Cobalt and became a bedroom community for many of the mine owners who built homes overlooking Lake Temiskaming in what came to be known as Millionaires’ Row.

In working with local historians like Peter Fancy and Brian Hobbs, Guertin was drawn by the stories of the early prospectors – many of whom are in the Canadian Mining Hall of Fame – who journeyed to Cobalt during the frenzied Silver Rush, and later fanned out to discover major mining camps in Kirkland Lake, Porcupine (Timmins) and Red Lake.

“It’s exciting to see how it all started tying together.”

To promote the media event and her lodgings, Guertin attended the Prospectors and Developers Association of Canada’s (PDAC) annual conference in Toronto last March to launch a colouring book and two children’s games featuring the work of local artist Laura Landers that commemorate the Cobalt Silver Rush.

“After being at PDAC, I realized how the tourism world hasn’t tapped into the potential of the mining industry.”

But she returned home with plenty of contacts and encouragement.

“My head was spinning because it’s so big and how do you approach people?

“But on the second day, I started making good contacts and I could see a lot of businesses (from Northern Ontario) that were interested in getting away from the office to do some team-building and meetings in a different setting, and were interested in the product we had with Presidential Suites and Prospector’s House.”

Guertin feels the assets of the Temiskaming area and the mining belts of Kirkland Lake, Timmins and Sudbury can be packaged as a tourism route to lure travellers up Highway 11.

“You need to have a product for people to come up. What is it that they’re going to learn or want to know? We have a lot of little stories, but how do you tell those stories?

“I can see a niche there (in mining tourism) that’s never been pushed by the Ministry of Tourism or Northern Ontario. I really see this as an interactive tour and how it could be developed as more of a project for Northern Ontario, working with journalists to write the story.”

The May 1-2 media tour will mix together the past and present with quick stops to local museums, arts and crafts galleries, mining suppliers, and the Haileybury School of Mines.

New Liskeard furniture maker takes top honours
Dec 6, 2016 1:11 PM
Comments
We welcome your feedback and encourage you to share your thoughts. We ask that you be respectful of others and their points of view, refrain from personal attacks and stay on topic. To learn about our commenting policies and how we moderate, please read our Community Guidelines.