Beef farmers look to gain ground in the Clay Belt

After the turn of the last century, the provincial government set about creating a “New Ontario” by offering land and cash to populate the Great Northern Clay Belt with first-time farmers.
0
Mar 31, 2016 3:21 PM By: Ian Ross 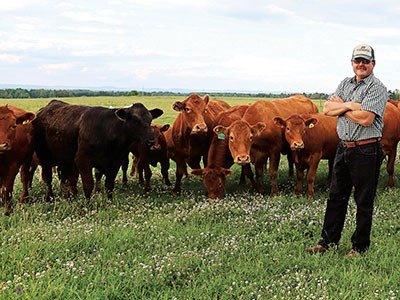 Cow herd expansion in the Cochrane District and across Northern Ontario is on the mind of Beef Farmers of Ontario president Matt Bowman.

After the turn of the last century, the provincial government set about creating a “New Ontario” by offering land and cash to populate the Great Northern Clay Belt with first-time farmers.

That top-down and ill-conceived strategy to colonize the North turned out to be an expensive failure that was finally put out of its misery by Premier Mitch Hepburn in the 1930s.

These days, there’s a grassroots movement afoot by the Beef Farmers of Ontario (BFO) who are eyeballing this prairie-like stretch of land as the most logical place to revive and expand the cow-calf herd in the province.

The 19,000-strong group has launched its Beef North action plan, a lobbying and awareness campaign that is both a recruiting tool to attract farmers north and the cornerstone of their negotiations with Queen’s Park to open up Crown land to farming.

“There’s a lot of the province that’s very underutilized as far as farmland is concerned,” said Matt Bowman, a fourth-generation beef farmer with a herd of 110 Charolais, located in the Thornloe area of Temiskaming.

Bowman, who was recently named president of the Beef Farmers, is spearheading the effort to stem the decline in Ontario’s beef production and offer an affordable option for the next generation of farmers.

Canada’s mad cow crisis (2003-05) took a devastating toll on the industry and when markets finally recovered many cattlemen saw it as a window to get out.

The average age of an Ontario beef farmer is 54.5 years and there’s been more money to be made in other competing commodities, Bowman said.

For the last two years, Bowman and the BFO directors have been ruminating over ways to reenergize the industry and have concluded that expansion into the North is the only solution.

Just under 13 million acres is being farmed in Ontario. The Clay Belt has 16 million acres that the Beef Farmers say could support cow-calf production.

A satellite image in the Beef North brochure shows a striking contrast in rural development on the Clay Belt from the mostly forested Ontario side to the extensive blocks of farms in the Abitibi region of northwestern Quebec.

“For the last 50 years, Quebec had a very lucrative support program,” said Bowman. “There was money available for clearing land and producing cattle that wasn’t available in Ontario. It’s gone by the wayside but the farms are already established.”

The North’s climate limits what cash crops can be grown, but the fertile soil is perfect for growing hay, oats and grazing cattle.

“This place grows grass like crazy,” said Bowman, whose group is targeting the Cochrane District, starting at Matheson and running northwest along the Highway 11 corridor to Kapuskasing and Hearst where only small pockets of farms exist.

For Northerners accustomed to the boom and bust cycles of mining and forestry, the Beef Farmers frame this initiative as offering greater economic stability and better long-term prospects.

The Beef Farmers contend that adding 30 new farms to the region every year for the next 20 will generate more than $3 billion in economic activity for Northern communities in construction, tiling, fencing and concrete work.

Converting Crown land to farmland over this same period would generate more than $600 million in revenue for the province and contribute more than $6 billion in value-added GDP to Ontario’s economy.

“We’re working with the government in trying to pitch different scenarios,” said Bowman. “To date, we haven’t seen too much movement on it.”

Though the province is amenable to their proposal, Bowman admits the government has to deal with other competing Crown land interests from First Nations, mining, forestry and the tourism sectors.

But the province supports the expansion of agriculture in Northern Ontario in principle as indicated by Premier Kathleen Wynne’s mandate letter to agriculture minister Jeff Leal in 2014.

Most importantly, the affordability of farmland in the North overcomes the greatest barrier for aspiring farmers in southern Ontario who want to enter the business.

A viable farm needs about 2,000 contiguous acres, something that’s not economically possible in southern Ontario. In Middlesex County, near London, Bowman said farmland is routinely priced around $25,000 an acre.

The comparative price of entry is much cheaper in Temiskaming, where farmland ranges between $4,000 and $5,000 an acre. In more undeveloped areas further north, it can be as low as $500 an acre.

“We’re saying, look at this as an option,” said Bowman.

The Beef Farmers believe this is an economic development opportunity that is not to be missed.

The local food movement is gaining strength in the North, but Bowman said there’s huge beef demand in the south. “We can’t supply the demand we’ve got for the city of Toronto.”

Their projections indicate export opportunities to China and Pacific Rim countries as those populations become more affluent and shift to a more protein-heavy diet.

“We might as well be the one that fills that void,” said Bowman.

By way of financial supports, Bowman said the Northern Ontario Heritage Fund offers funding to clear land and install tile drainage. His group is working to expand a co-operative program to provide new farmers with the initial backing to purchase cattle.

Bowman said should they be successful in recruiting farmers and enlarging the agricultural base in the Cochrane District, there’s no reason why their plan can’t be rolled out across the North, and even into rural areas in central Ontario that used to raise cattle more than 50 years ago.