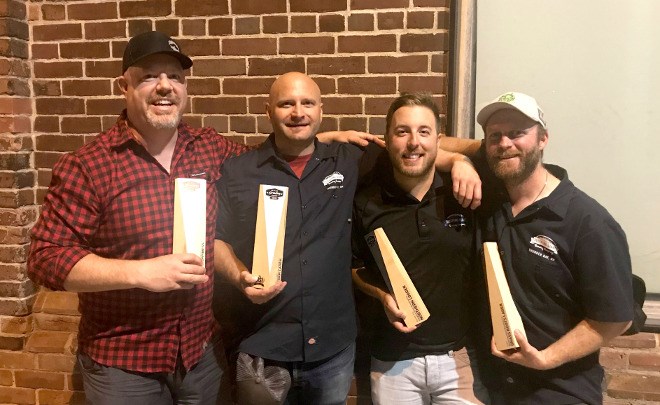 Sleeping Giant Brewing Company team with the hardware at the Sept. 13 Ontario Brewing Awards in Toronto.

The annual awards highlight the top breweries in the province in 49 categories. Nominations came in from more than 120 breweries.

Sleeping Giant was recognized in the following categories:

“Our team definitely earned their beer; this is a direct result of our hard working, dedicated staff. Sleeping Giant Brewing Company has a growing reputation for the quality and creativity of our beer, and it’s an amazing recognition to be acknowledged amongst the best of the best in Ontario,” said Kyle Mulligan, Sleeping Giant’s head brewer.

“There were a lot of great beers, creating tough competition, so this really attests to the superior quality of our product. Sleeping Giant Brewing Company’s craft beers are truly northern, all inspired by Lake Superior, which creates easy drinking, full-flavoured brew,” he added.

The craft brewer works out of a 12,000-square-foot manufacturing space, tap room and retail space in Thunder Bay’s inner city. The 32-employee company opened its door in 2012 and is listed as the 25th largest brewery in Ontario.