Unmanned aerial vehicles (UAVs) have quickly become a cornerstone teaching and analytical tool for professors and students in the faculty of natural resources at Lakehead University in Thunder Bay.
0
Nov 24, 2015 3:33 PM By: Ian Ross 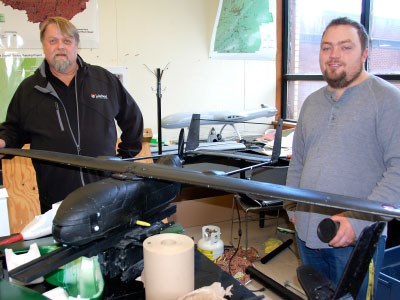 Unmanned aerial vehicles (UAVs) have quickly become a cornerstone teaching and analytical tool for professors and students in the faculty of natural resources at Lakehead University in Thunder Bay.

UAVs – also known as drones – are have been a transformative data-gathering vehicle for both Lakehead researchers and their clients with its myriad of applications in forestry, mining, agriculture and various eco-friendly uses.

“We’ve started realizing this is a technology which can have the same impact as GPS did,” said Alex Bilyk, former Lakehead graduate student-turned-private consultant. “GPS fundamentally changed the way we collected information in the bush.”

The faculty adopted UAVs about three years ago to further enhance its study of aerial photography in its natural resource planning programs.

“We wanted to find those situations where there were some niche markets where a drone would be more effective,” said Bilyk.

The first UAV they’ve experimented with was a modified movie industry drone, a bulky, seven-foot long, gas-powered drone, supplied by an Ottawa company.

Since then, they’ve amassed a mini air armada of six aircraft: three fixed-wing and three rotary-wing, the largest being an eight-bladed copter with a 25-pound lift capacity. All are capable of autonomous flight.

In a Lakehead lab, Bilyk and Ulf Runesson, the faculty dean, assemble drones from kits ordered from China and outfit them with standard 24-megapixel cameras shooting both video and still photography.

“We lift and land them, but they fly themselves for the photo missions,” said Runesson.

At their 3,000-foot grass airstrip off Highway 61, about 15 minutes from campus, the UAVs are proving to be a powerful technology in the hands of students and professionals alike.

“What drones do is democratize the access to information,” said Bilyk, who is training a logging contractor on how to use UAVs while also teaching a Lakehead course this fall on using drones in natural resources management.

Beyond just measuring tree heights and identifying species, their extensive video library shows that drones can be deployed in forest management scenarios such as free-to-grow surveys or for pinpointing GPS-tagged bundles of logs under the snow after the feller-bunchers have gone through.

They can be used to conduct volume metrics at landfills, for wood chip and aggregate piles, and for conservation purposes like inspecting bird nesting sites or counting wildlife.

“You’d be surprised what (information) you can get out of a camera,” said Bilyk. “You can get volumes with nothing but photos, and the reason is that the software has changed. What used to take months of processing, now takes hours to do complex volume calculations.”

In mining, they can be used in reclamation situations or to perform daily inspections of tailings ponds.

Some Lakehead students are outfitting UAVs with infrared technology to identify drought conditions in agriculture and come up with a soil treatment plan. They’re also investigating drone applications for crop assessments and precision agriculture methods using different treatments of herbicides and pesticides.

While Bilyk and Runesson both say drones won’t completely replace conventional aircraft for aerial photography, the light-weight and nimble craft offer a more cost-effective solution to gather data on a more frequent basis.

Chartering an aircraft for aerial surveys can be a $15,000-a-day proposition. The only ongoing cost for an UAV owner is recharging the battery.

All their drones are operated under an umbrella group known as Lakehead’s Centre for the Application of Resources Information Systems, (LU-CARIS).

Its guiding principle is promoting technology transfer through partnerships with industry, consultants and conservation groups.

Through its many pilot and research programs with industry, LU-CARIS operates strictly on a cost-recovery basis.

“That’s our role,” said Runesson. “We’re not taking away opportunities from private business. If there’s a consultant in town that can do it, we refer to them.”

Their expertise in this technology is now being exported overseas to Ghana where the Lakehead is working with Sunyani Polytechnic University to establish the first UAV training centre for natural resource management.

The West African country has no history of aerial photography due to challenges such as unfriendly borders.

The faculty has also been approached by conservation groups in West and South Africa looking for help with poacher monitoring.

Canadian laws prohibit drone operators from flying beyond line of sight. No such restrictions exist in Ghana. A drone can be equipped with a thermal camera to allow a conservation officer to find a poacher’s campfire many kilometres away.

Perhaps most importantly, Runesson said they want to train UAV operators on how to use the technology responsibly and to fly by the book according to Transport Canada regulations.

“We’d like to be on the leading edge of using this responsibly.”

Their UAVs fly below a self-imposed 1,000-foot ceiling to avoid aerial collisions with objects and outside the city limits, unless for an endorsed purpose.

Should the federal government eventually introduce a licensing system for UAV owners, Runesson wants his faculty to be recognized as a certified trainer. “We are working on developing training programs, not just for industry but for the general public.”