Northwestern Ontario must work to attract new residents from other places if current economic levels are going to be maintained. That was the message at Common Voice Northwest’s conference on Sept.
Sep 26, 2016 3:38 PM By: Kris Ketonen 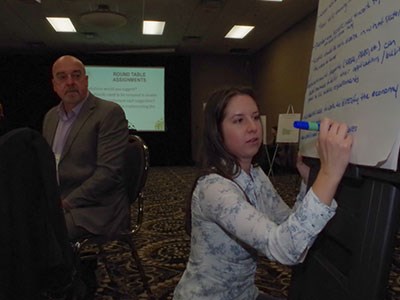 Inducing a wave of new immigration is being posed as a solution to keep northwestern Ontario’s economy humming at sustainable levels.

Northwestern Ontario must work to attract new residents from other places if current economic levels are going to be maintained.

That was the message at Common Voice Northwest’s conference on Sept. 23 in Thunder Bay, which drew people from across the region to the Victoria Inn to discuss the challenges posed by changing regional demographics.

“When you’re looking at the numbers it can appear overwhelming and somewhat bleak,” said Madge Richardson, executive director of the North of Superior Workforce Planning Board.

Today, the population of northwestern Ontario is aging and shrinking. For example, in 2013, people between the ages of 50-54 were the region’s largest age group, making up just over eight per cent of the population.

The second-largest group was those aged 60-64, at just under eight per cent.

These trends, however, have been observed for some time, said Charles Cirtwill, president of Northern Policy Institute, who also spoke about demographic trends.

In fact, the northwest’s aging population has produced some positive results: namely, good jobs are opening up for younger workers.

“It’s an opportunity to attract people from Toronto and say ‘if you haven’t had a success in putting down roots there, now’s your chance,’” Cirtwill said.

In her presentation, Richardson said that the Thunder Bay district alone would need to bring in 1,500 new residents - over and above those who leave - each year for the next 25 years if the economy is to continue to function at its current level.

The Kenora district, meanwhile, would need to attract 600 people per year. In the Rainy River district, the magic number is 200.

And while these numbers are high, Richardson said they are ideal. The economy can be sustainable, albeit not as strong as today, with fewer new residents.

“Anything you get up to that point is going to be acceptable,” she said. “It’s going to be better than doing nothing.”

Luckily, Cirtwill said, the northwest has an edge that goes beyond the jobs themselves.

“Thunder Bay's got a lot of interesting things that fit the profile of what millennials are looking for,” he said, citing things like Internet access and entertainment - live music and a good mix of restaurants - as millennial draws.

And while cities like Toronto have those things too, they’re lacking a major attractor: the great outdoors.

“The new generation is increasingly looking to spend eight, 10 hours on a computer, working globally for their client in Abu Dhabi or whatever, and then shutting the computer down and going to find some sort of (outdoor experience),” Cirtwill said.

When it comes to international immigration, though, the issues are general matters of federal and provincial policies.

Cirtwill offered the example of immigrant entrepreneurs who already have a set of skills and are interested in running a business in the region.

“There are restaurants, there are hotels, there are taxi firms, there are engineering companies that are run by first, second and third-generation immigrants already here in the community,” he said. “We know we can sell . . . an opportunity to come in and run a business.”

However, provincial policies come into play: a business must have a certain value before an immigrant can purchase it.

“What we need to be asking is, is $500,000 too much for some of these Northern communities?” he said. “What is a corner store in Red Lake or Geraldton worth? What is a small dental office in Marathon worth? And if we see that Northern businesses are still well below the $500,000 threshold, then we have to take a look at that.”

Another obstacle is the process of hiring an immigrant, said Paul Wodja, the Thunder Bay Multicultural Association’s youth program facilitator, who spoke on immigration challenges and opportunities.

For instance, a business may be required to do a labour market impact assessment before hiring someone from out of country, which is a time-consuming process.

“The challenge is kind of, how do we make it fair?” Wojda said. “When we can’t find somebody, how can we expedite that process to bring somebody else in?”

“I still think a big answer is our Indigenous communities up in the North,” Hobbs said.

“If we got (the Ring of Fire) going, we could train a whole workforce of Indigenous people and youth and get them working, instead of seeing what we’re seeing in our communities where youth are coming down and they’re dying,” he said. “We’re seeing gang (activity) and violence and homicides. We need to get those kids working first and foremost, I’ve always said that.

“Instead of looking at immigration and bringing people over from Europe and other countries, let’s look within our own country.”