If you go to Sunwire Inc., you’ll have to look behind the scenes for its CEO and founder, Jason Legault. Legault likes to work hands-on at the Sudbury-based telecommunications company.
Sep 1, 2016 3:47 PM By: Ella Myers 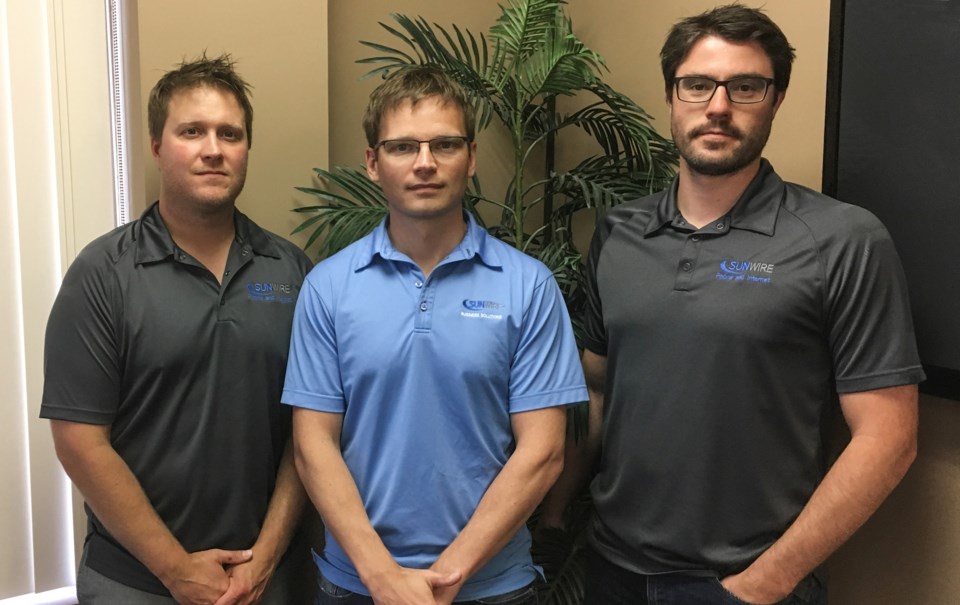 If you go to Sunwire Inc., you’ll have to look behind the scenes for its CEO and founder, Jason Legault.

Legault likes to work hands-on at the Sudbury-based telecommunications company. His roots are in electronics and programming, and that’s where he shines, according to business partner Alex Levesque.

Sunwire started off as a software development company in 2009, but has evolved to offer telephone and internet services, and in 2010 introduced SolSwitch, a voice over internet protocol (VoIP) product that allows calls to be made over an internet connection rather than a typical phone line.

Legault oversees the development of SolSwitch and Sunwire’s service from the ground level. From an early age, he enjoyed playing with electronics and developed the skills he still gets to use today.

“I was always the one that people would come to when they needed something figured out, like setting the time on the VCR.”

Legault’s first introduction to how various kinds of circuitry worked was through Science North’s technology lab. The Sudbury science centre was equipped with sample circuits he started to experiment with.

He began shovelling driveways and mowing lawns, using the money he earned to buy his own books and electronic parts. Seeing his interest, his father built him a work station in the basement for his experiments.

For a Grade 7 science fair, Legault built window blinds that automatically opened when it was bright out, and closed when it darkened. In Grade 8, his project was a sensor-equipped mailbox that would alert homeowners when they had mail.

“These two projects never really went anywhere, even though to this day I still think they are neat ideas,” said Legault. He moved houses shortly after, and there wasn’t room for all of his tools, so he became absorbed by computers.

“Once I began programming I knew that this is what I wanted to do,” said Legault. “While my friends were busy playing sports, I was at home developing computer games.”

Legault’s first taste of the professional world came when he decided to skip the bus home one day, and went to internet service providers in town and asked to volunteer his time to learn more. Vianet accepted his offer, and within a month, Legault was on the payroll.

With the experience he gained at Vianet, Legault launched his first business, Unitz Shell. Legault sold shell accounts to dozens of clients locally and around the world for around $10 a month, using a dedicated phone line and a Vianet internet connection. As his interest in internet connections grew, Legault realized he wanted to turn it into an internet provider.

In 1997, at 16 years old and with a $10,000 loan, Legault officially rebranded Unitz Online as an internet provider, although not everyone was the biggest fan of his new project.

“Because I was still attending high school, we had employees working day shifts. I carried around a pager in case I was needed. My teachers didn’t like when I got paged while in class, but I had a business to run,” said Legault.

When he graduated, he transitioned to working full time at Unitz. Over the 10 years Legault ran Unitz, they offered high-speed internet cable across the North on the Eastlink network, launched a VoIP service that had competitive long distance rates, and had offers to sell the company, which he eventually did in 2007.

“Although it was a great deal financially, this was a very sad time for me. Unitz was my baby and I had to watch it go,” said Legault. Fortunately, by 2009, he found a new baby in Sunwire and SolSwitch.

Sunwire has had several recent developments. They primarily work with business services, but have started offering residential services including the rollout of home internet to Sudbury residents last spring.

Levesque said that their phone service is competitive and appeals to people who want to drop more expensive land lines but retain a home phone – the cost of a SolSwitch phone line is around $5 a month.

Even more growth is on Sunwire’s agenda.

They’re serving more areas across North America, including a ramped up presence in downtown Toronto. At the moment, they’re adding another 2,500 square feet to their existing 2,300-square-foot Barry Downe Road office space in New Sudbury.

More space can house their growing team, which has grown from around five at the beginning to 13 today, and Legault said he hopes to see it grow more.

“In the next five to 10 years I hope for Sunwire to have at least 100 employees, and locations across Ontario and Canada,” said Legault. “At the rate we are growing now, I can easily see this happening.”