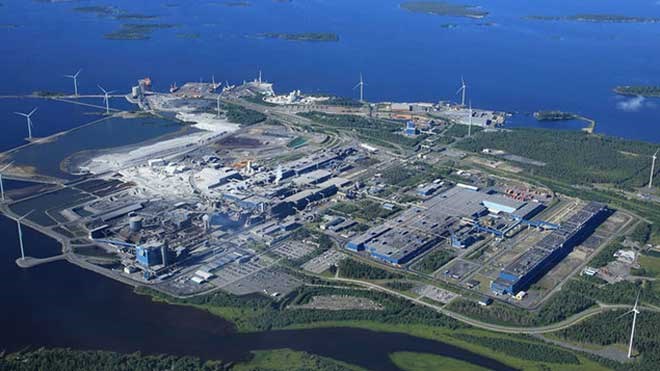 A delegation from Greater Sudbury that visited Finland last week came away impressed by the way the ferrochrome smelter operates in that nation, both environmentally and economically.

Mayor Brian Bigger led the delegation that returned Jan. 18 from Tornio, the Finnish community near the border with Sweden where the Outokumpu smelter is located.

The most technically advanced chromite smelter in the world, Noront Resources plans to build a similar facility in Northern Ontario to process ore from the Ring of Fire.

Sudbury, Sault Ste. Marie, Timmins and Thunder Bay are all in the running to become home to the smelter, expected to create as many as 400 jobs.

“During our four days in Finland, we were able to visit and tour the Outokumpu ferrochrome processing facility,” Bigger told members of city council on Jan. 23.

The facility uses submerged anode closed furnace technology, the same that Noront will use in its chromite smelter.

“In fact, the furnace that we visited was opened in 2012 when the plant was doubled in size,” Bigger said. “For a heavy industrial site, it was quite clean … They explained the company's commitment to environmental stability, their belief in a circular economy.”

A circular economy is European Union policy that looks for ways to reuse waste from industrial sites and commercialize it. Ferrochrome slag in Tornio, Bigger said, is crushed and used as an aggregate for building roads.

“So we learned a road-building secret from Finland.”

The delegation spoke with health officials about the impact of the smelter on the health of residents and the environment in the area.

“At a high level, we were all very impressed with the health tracking, the environmental monitoring and the integration of the education system in their local economy,” Bigger said. “Our brief trip to Finland filled us with confidence that we are pursuing an opportunity that builds on the strengths of the Greater Sudbury community and will provide significant economic benefits without significantly increasing to environmental risk.”

Ward 6 Coun. Rene Lapierre said the group were rare visitors to the area that weren't there just to “pet a reindeer,” a popular pastime in the far northern country.
Lapierre said he spent time with health officials in the community, toured a health centre, met their lead physician and talked about impact of smelter on the health and safety of the residents.

“They work with industry to ensure they have regular testing of employees – preventive testing with x-rays and blood work,” he said.

Different types of tests and screenings are done depending on where the employee works at the smelter, based on their potential level of exposure.
“This preventive (testing) has had a very positive effect on the workers' health outcomes at the plants for two reasons,” Lapierre said. “They've shown that with the proper personal protective equipment, and safety measures, there's no danger to work there for the employees.”

Annual and some biannual environmental tests are done on nearby water, aquatic life, plants, animals, grubs and berries.

“They are looking to see if there are any changes to life around the smelter,” he said. “They haven't found any changes or any leaching from the plant in the surrounding environment.”

Noront set a Feb. 2 deadline for cities to submit bids.