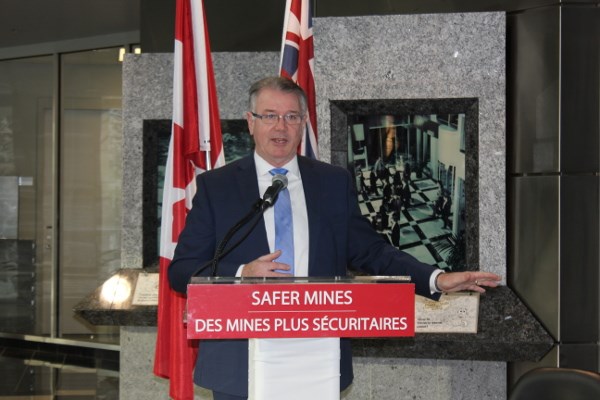 Workplaces are changing, and the province is asking whether regulations should change to address them.

But some Sudbury businesses are questioning the current review.

“Is it necessary?” asked Geoff Jeffery, a Sudbury labour lawyer. “It's unclear to us that there need to be significant changes.”

The Changing Workplaces Review released an interim report in July and presented a range of options for advisors to amend Ontario’s 1995 Labour Relations Act and the 2000 Employment Standards Act.

The primary focus of the report is the rise of precarious employment, which includes temporary, contract, or part-time positions. The rate of temporary work has been rising 3.5 per cent a year.

Labour Minister Kevin Flynn was in Sudbury Jan. 12 to address the review at a Sudbury chamber event.

“[Premier Kathleen Wynne's] mandate to me was to look at the realities of working today,” said Flynn, who described the review as "overdue."

However, Jeffery is worried added regulation could burden employers financially and bureaucratically.

More regulation is often seen as “anti-employer," and Jeffery is especially worried about the regulatory burden that could disproportionately impact small businesses.

“A one size fits all model doesn't work for business in Ontario. It doesn't reflect the differing nature of businesses in communities. It makes surviving in a difficult economy even more difficult.”

What Jeffery and other chamber members would like to see is more education rather than enforcement.

“The existing laws are quite fine. You should trust Ontario employers and employees to negotiate the terms of employment,” he said.

However, Jeffery acknowledged that the review seems intent on supporting business.

Flynn emphasized that his mandate is to ensure any changes don't negatively impact the global competitiveness of Ontario.

A review doesn't necessarily mean major changes on all fronts, he stressed.

Advisers have provided a range of options for the 50 issues identified in the interim report – from 'do nothing' to 'do something,'” said Flynn.

For example, on the topic of temporary worker regulation, they will be looking at keeping the status quo, limiting the number of temporary employees a business can employ, or legislating something in between.

A final report is anticipated in February.

While in Sudbury, Flynn also addressed the new requirements to improve mining safety that came into effect Jan. 1.

Flynn said it was important that families of workers who have been injured or killed in mines were involved in this process.

“Someone once described the culture of health and safety as what you do when no one is looking,” said Flynn.

He added that he's “seen a change, there's a very strong culture of health and safety.”

Architecture school's founding director honoured for 'outstanding contributions to the field'
May 18, 2021 8:57 AM

Student business pitch winner wants to bring more women to the trades
May 13, 2021 9:00 AM
Comments