Despite occupying one of the most mineral-rich areas of the world, large swaths of the Sudbury basin have remained unexplored.
Sep 15, 2014 6:49 PM By: Jonathan Migneault 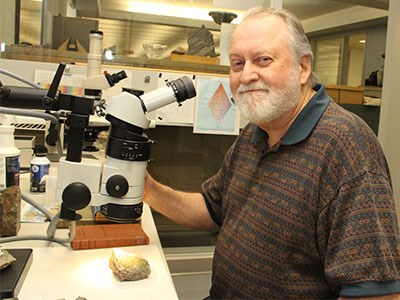 Sudbury district geologist Dan Farrow of the Ontario Geological Survey examines a mineral sample at his office near Laurentian University. Farrow said there are a number of potential Sudbury Basin deposits that could be developed in the near future, including Glencore's Errington and Vermilion projects.

Despite occupying one of the most mineral-rich areas of the world, large swaths of the Sudbury basin have remained unexplored.

Dan Farrow, the Sudbury District geologist with the Ontario Geological Survey, said Vale and Glencore hold a large number of patented mineral claims for tracts of land in the basin that only they can explore.

Because both companies have a number of productive mines in the camp, they haven't yet bothered to explore many of these prospective areas.

The patented claims – which lease mineral rights to the companies in question – are in an area geologists refer to as the Eruptive. Researchers estimate a meteor made impact with what is now the Sudbury basin more than 2 billion years ago.

The impact left a crater 200 kilometres in diameter, and brought molten magma beneath the Earth's crust to surface.

The prevailing theory, said Farrow, is that the magma was rich in minerals, such as nickel and copper. When it hardened, it formed the mineral deposits that have defined the basin.

“That's what Inco and Falconbridge mined for years because it was so easy,” Farrow said.

During the 2000s, smaller mining companies like FNX had to be more creative and mined footwall deposits – the rock on the underside of the mineral vein – that had fewer large solid chunks of minerals.

But the footwalls, while more difficult to mine, proved to be rich in copper and platinum group elements, which are important components for catalytic converters in vehicles and fuel cells.

FNX proved successful enough to attract a merger with Quadra, and a later buyout by Polish mining giant KGHM International.

For Farrow, one of the most exciting mining companies exploring the basin today is Wallbridge Mining.

“Wallbridge is a Sudbury success story because they're the third largest property owner,” he said. “They're just a pleasure to have here because they work so hard and are very thorough.”

Wallbridge opened its Broken Hammer open-pit mine earlier in the year.

The mine is expected to produce around 195,000 tonnes of in-pit copper, nickel and platinum group elements.

The company also plans to conduct exploration activities on its Wisner properties, which surround the Broken Hammer deposit. Geophysics and drilling have already been initiated on those sites.

While the mining sector has been in a cyclical downturn for the past couple of years, Farrow said there are some potential bright spots on the horizon for Sudbury.

Glencore is currently undergoing feasibility studies on its Errington and Vermilion base metal projects in preparation for a $350-million development that would produce an estimated 2,900 tonnes of ore per day over a seven- to 10-year mine life. The development is expected to create between 200 and 250 jobs.

Ginguro Exploration Inc. continues to explore the former site as part of its Pardo Project. The company owns a 100 per cent interest in 80 square kilometres of claims that it says contain a large tonnage potential for gold.

Results from an initial hole were enriched with rare earth elements cerium, lanthanum and neodymium.

As of November 2013, Canada Rare Earth Corporation was developing a plan to develop the property, which it said “continues to have significant potential.”

Despite Sudbury's long mining history, Farrow said its status as a world-class mining jurisdiction will not disappear any time soon.

“So far the mining seems to only be limited by our technology,” he said.

Construction robotics technology could address housing issues in the Far North
Jul 26, 2021 10:00 AM